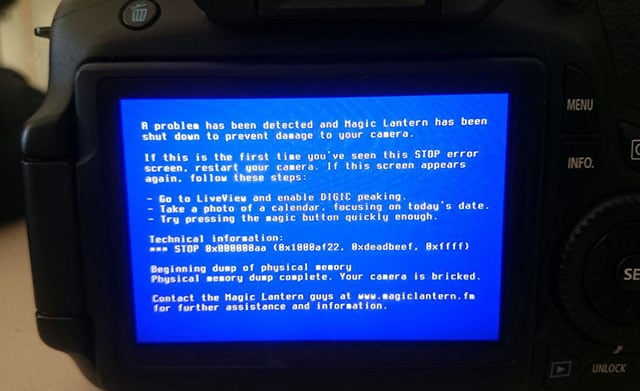 Magic Lantern is being slammed online after pulling an “unfunny” April Fool’s Day prank that gave DSLR owners a fake “Blue Screen of Death.” The message on the screen contained phoney technical details and informed users that their camera was “bricked.”

Developer Vladimir Ivanov wrote about his experience with the prank in a lengthy blog post. After diving into the code, he discovered that a Magic Lantern developer had added a “joke mode” to the firmware that randomly displays the error message to users on April 1st.

“What?! Joke mode? Seriously?” he writes. Ivanov calls Alex “the developer who spoiled the evening of April 1st, as well as my mood and nerves. It was not funny.”

One user who experienced the prank turned to the Magic Lantern forums on April 1st, saying that they needed help and that their Canon 60D had shown the blue screen several times. “How can I fix it?” they ask.

The backlash against Magic Lantern has begun. There’s a heated discussion about the prank over at Hacker News.

“Well this is depressing. I was always meaning to install ML, now I’m not sure I can trust the developer for doing something so stupid and not feeling and contrition for it,” one commenter writes. “Holy %$! that’s bad. If you’re paid to take photos, roll up to a gig with all the gear you tested yesterday, and get this…good god,” says another.

In the Magic Lantern forums, the whole thing has turned into an argument of sorts.

“Haha, this is all really f*ing funny, but I spend a lot of time perfecting my photos, some of which are once-in-a-lifetime photo opportunities. I don’t need Magic Lantern developers PURPOSEFULLY f*ing up my photos as a practical joke,” writes one photographer.

Some of the responses are unapologetic and reminders that Magic Lantern is simply a popular free project created by hobbyist developers.

“How about a 1000% refund of the purchase price of ML? I will pay that to you personally, let me know where to send the check,” one member responds. “This is where you are totally mistaken. This is not a professional project. It is not intended to be a professional project. This is a spare time, hobby project that is just for fun. There are all kinds of disclaimers to this end.”

So, if you’ve been planning to play around with Magic Lantern, just be aware that you may find some interesting “easter eggs” packaged in the software on April Fool’s.

(via Hacker News via Boing Boing)