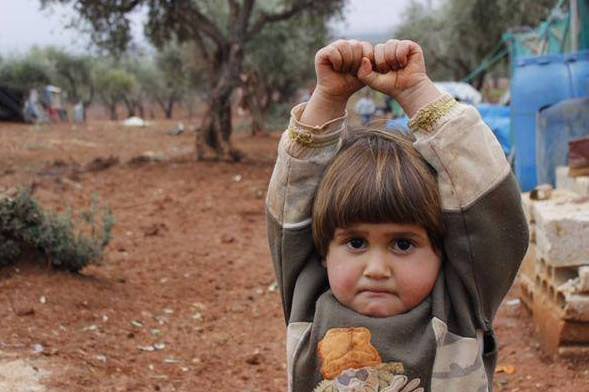 One of the most widely shared photos on the Internet in the past week has been the picture above by Turkish photojournalist Osman Sağırlı. It’s a portrait of a young Syrian girl he encountered back in 2014, who mistook his telephoto lens for a weapon and instinctively threw up her hands in surrender.

The photo was prominently shared last week in a tweet by Gaza-based photojournalist Nadia Abu Shaban:

photojournalist took this photo 4 Syrian child, thought he has a weapon not a camera so she Gave up ! #Surrended pic.twitter.com/bm1hOWQWJY

The photo has been retweeted on the social network over 17,000 times and favorited more than 7,000. Soon, Reddit and other online sources picked up on the story, causing it to go viral across the Web.

“That’s heartbreaking,” says one Reddit commenter. Another writes: “To think a child so young is conditioned to do this just kills me.”

Others questioned whether the photo actually shows what Shaban had originally claimed (that the girl was spontaneously surrendering to the camera). The BBC did some investigation and published an article about the story today.

Sağırlı tells the BBC that the photo shows a girl named Hudea who was four years old when he met her in a refugee camp in Syria in December 2014.

“I was using a telephoto lens, and she thought it was a weapon,” Sağırlı is quoted as saying. “İ realised she was terrified after I took it, and looked at the picture, because she bit her lips and raised her hands. Normally kids run away, hide their faces or smile when they see a camera.”

The photograph was first published in a Turkish newspaper back in January. Although it went viral in Turkey at the time, it took several months for the powerful image to make its way around the world.

(via BBC News via Phogotraphy)

Google Drive Now Gives You Access to Your Google+ Photos

Heads Up: The Tablet Selfie Stick is Now a Thing