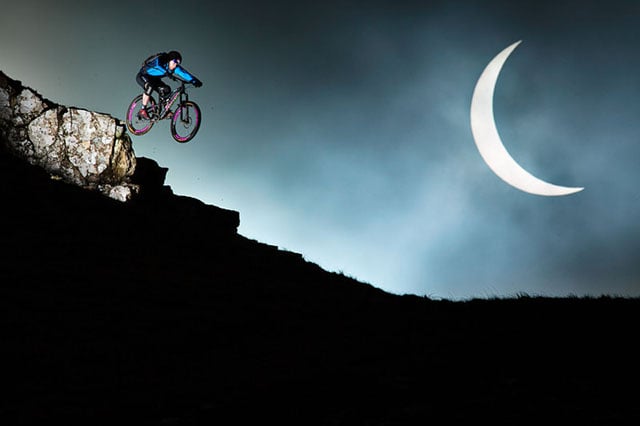 One of the many amazing photographs that emerged after the recent total solar eclipse was this epic shot of stunt biker Danny MacAskill soaring down a hill with the moon eclipsing the sun in the background. Many on the Internet immediately called the shot a “fake,” but it’s far from it.

It took photographer Rutger Pauw quite a bit of planning and a healthy dose of luck to capture the memorable photograph.

The shoot happened in MacAskill’s homeland, the Isle of Skye in Scotland. Pauw spent days with his team searching for the perfect spot in the island’s beautiful landscape. The weather in the location is known to be unpredictable, so there was no guarantee that the eclipse would be visible to the camera while it was happening.

When the short window of opportunity finally arrived, the team only had several minutes to try and capture the shot they envisioned. Pauw and MacAskill were separated by nearly 1000 feet, so they had to communicate with each other using walkie talkies.

For lighting, Pauw dug a hole near the jump site and stuck a powerful flash in it. Here’s a behind-the-scenes video showing how everything happened:

As you can see in the final shot at the top, everything came together just right when it counted. “Two weeks of location scouting in two different countries went into this, it’s such a miracle the sun came out in the end, we ended up with just this one shot!” Pauw tells us.

Image credits: Photograph by Rutger Pauw and used with permission

An 8-Bit Instant Camera Made with a Gun, Game Boy, Camera, and Thermal Printer