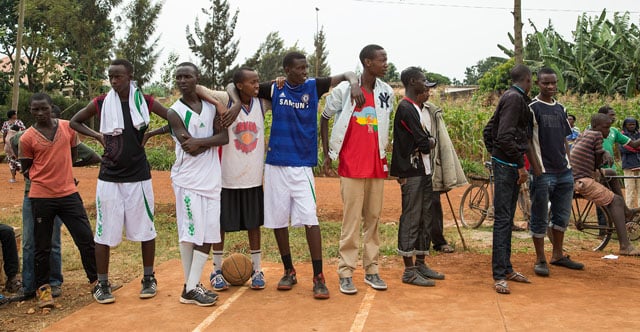 Back in June, I was lucky enough to partner with a Boston-based nonprofit, Shooting Touch, to travel to Rwanda and document the participants in their “Basketball Health Corps” initiative. They use the sport of basketball and their partnerships with health administrators to teach children valuable skills and preventative treatments when it comes to HIV/AIDS, malaria, and daily health. 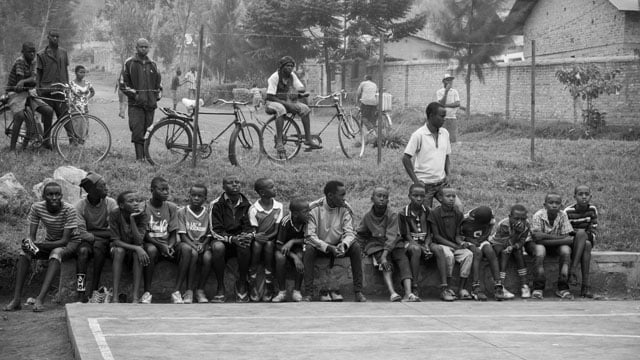 The stills were then used in their recent print and digital fundraising campaigns and were auctioned off at their annual gala. Photographs from the series are now hanging in the offices of Portland Trailblazer’s assistant coach Jay Triano, Channel 5’s Liz Brunner, and the Massachusetts Director of Tourism/Sports/Entertainment. 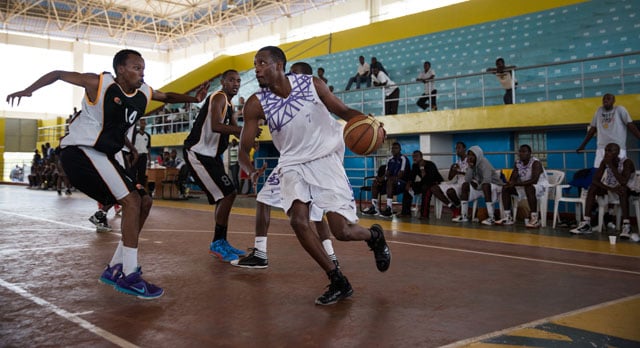 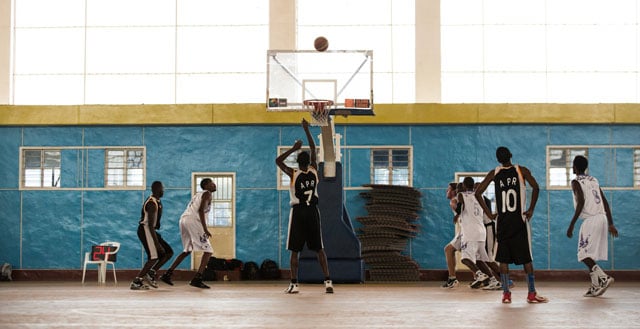 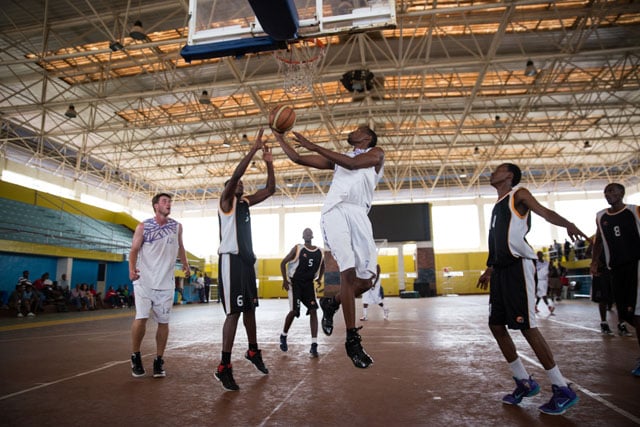 Filming and photographing in Rwanda was a huge challenge. I may have over packed a little with my camera bag weighing around 40 lbs (I don’t know how the military does it). But, with 2 camera bodies, an assortment of lenses, a solid shotgun microphone, and a tripod, I traveled from Boston to Istanbul to Kigali, Rwanda by plane then to Rwinkwavu, Rwanda by a local bus.

Luckily, I was with a small group of volunteers from the NGO as well as the founders Justin and Lindsey Kittredge. At first, I was extremely intimidated. We began our trek at Kigali’s main bus terminal, which is a disorganized disaster, with thousands, maybe even hundreds of thousands of people crowding around buses that lacked any order whatsoever. This is where I quickly learned to keep my camera down and simply get adjusted to the environment.

Once we arrived in Rwinkwavu things changed drastically and life slowed down. The village was beautiful — nestled on hills overlooking a valley that showcases an awe-inspiring sunset every evening. The people were curious but extremely friendly. Immediately we jumped in on games of knockout at the Shooting Touch basketball court and got to know the children. 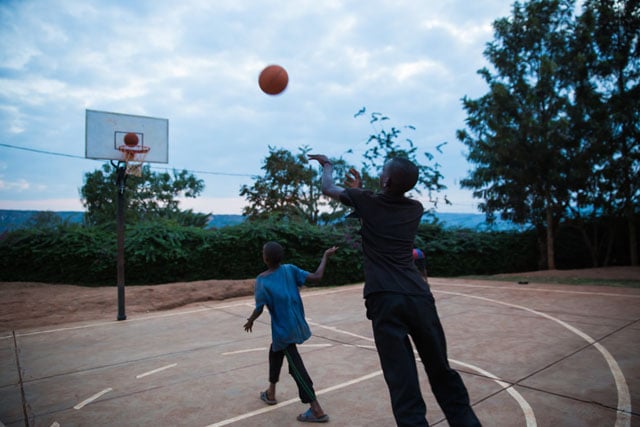 They loved the camera and posed for photos, pleaded to see previews, and showed off their skills. This became my favorite spot pretty fast. I was able to photograph portraits and action shots right away without any problem. I felt at home. 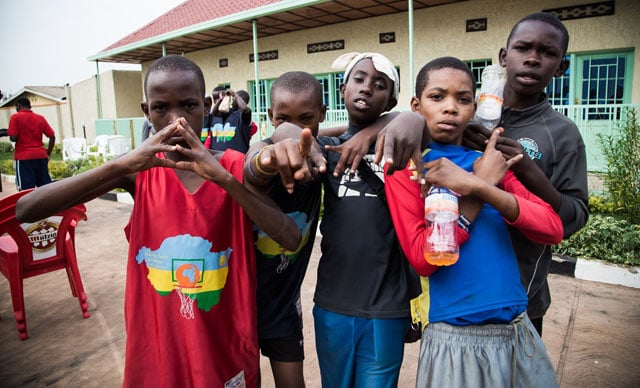 The next few days were filled with court visits all around the Eastern Province of Rwanda. They held a massive youth basketball tournament in Kayonza where the whole town seemed to pause from their daily lives and watch the event. The mayor, local health administrators, and even a representative from the US Embassy came by to watch and speak with the children. 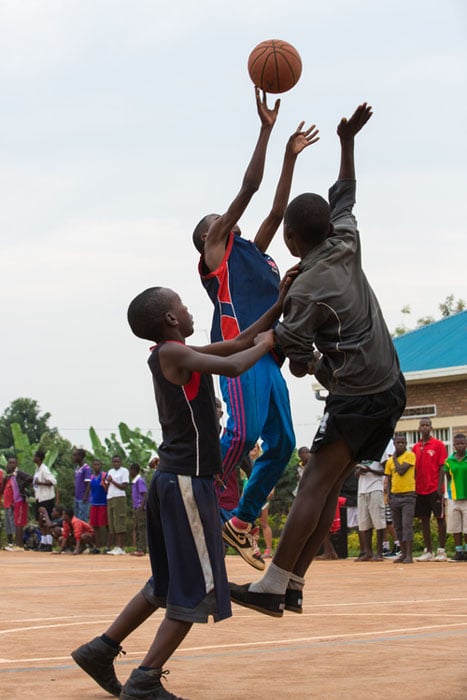 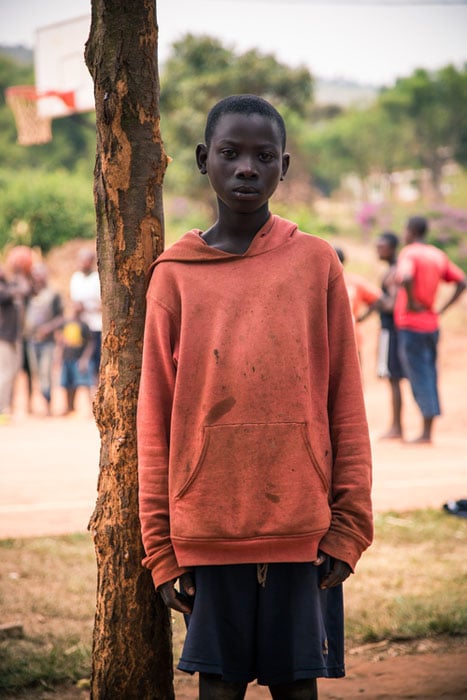 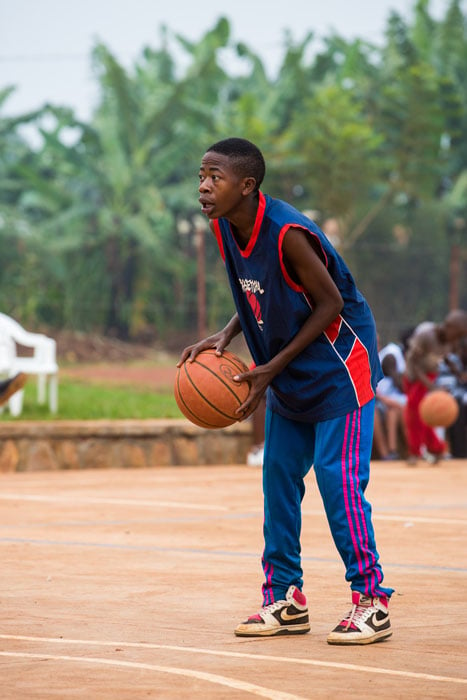 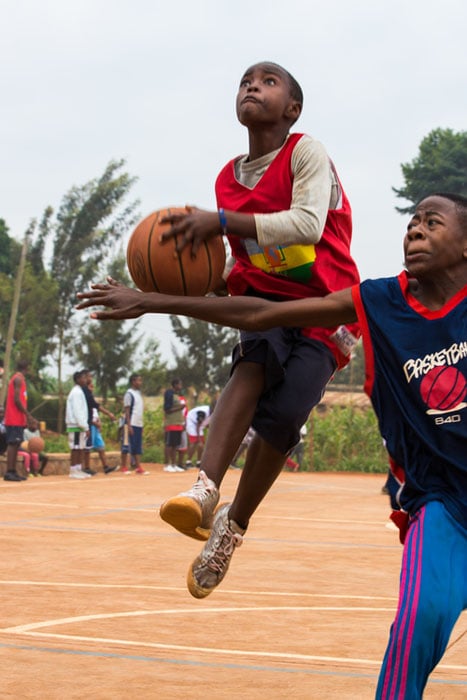 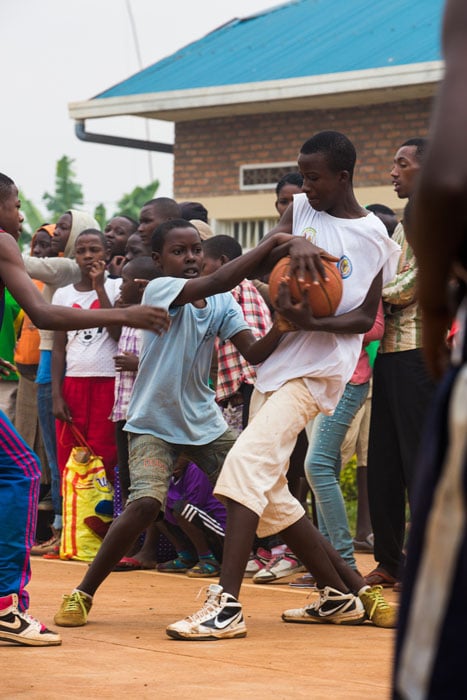 I held interviews and shot hundreds of stills as well as b-roll for the documentary. The whole time I was running around capturing the event, a group of young boys surrounded my equipment and held guard. It was pretty incredible. I only spoke about two words of their language, Kinyarwanda, but we created this amazing bond instantly. 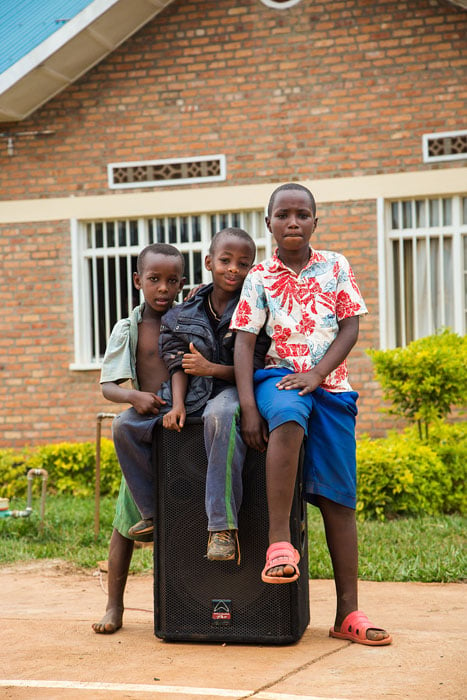 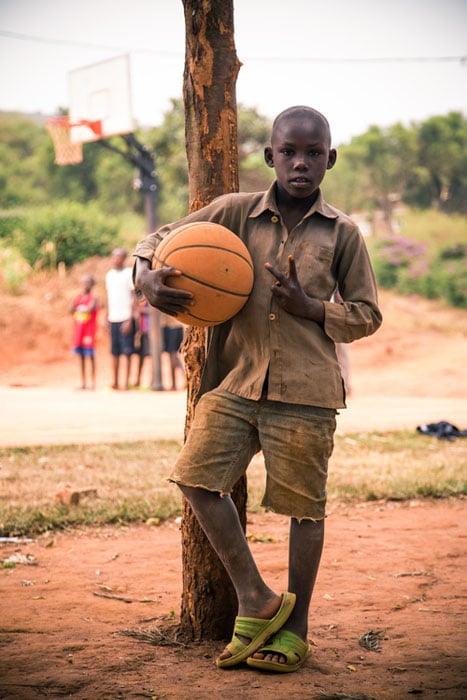 As I photographed, I would show them the previews on my camera and they would go nuts! We shared the joys of capturing the mid-flight shot and formed friendships all without words. Following the tournament, the Shooting Touch fellows organized a huge dinner for the children and adults involved.

We had to walk 1 mile along a roadway in order to get to the restaurant. Along came my new handy assistants, insisting on carrying the tripods and equipment without me even asking. Something to keep in mind is that most of these children were barefoot.

About a half mile out, a little girl who was about 6 years old ran up to me and tugged on my pants. I turned around and saw her holding up her hand to show me something. She had a small bolt that had fallen off my tripod. Let’s recap that. She ran bare foot about a half a mile to bring me a bolt for my tripod, that I didn’t even know I left behind. I was speechless. This was the norm in Rwanda. Selflessness and respect were values present every day in almost everyone we met.

The rest of the 12-day trip consisted of motorcycle rides, safaris, trying new foods I’d never though I would try (like fresh goat), a little water sickness, and a possible parasite but those highlights I may write about another time. The trip was a huge success that not only satisfied my client but drastically increased my overall photographic skills and outlook on life. I believe that I am a much better photographer, filmmaker and person because of my experiences in Rwanda.

About the author: Chris Cardoza is a photographer based in Boston, Massachusetts. He has photographed for Adidas, Reebok, Spaulding, and ESPN. You can find more of his work and writing on his website and blog. This article originally appeared here.