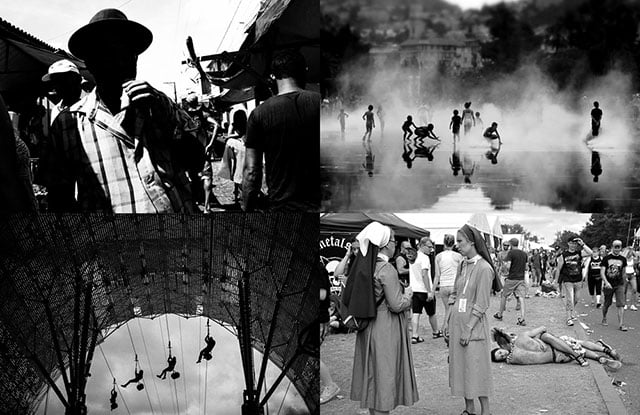 Last year I launched a new initiative called the Streettogs Academy, a biweekly challenge for motivating and sharpening the skills of street photographers around the world. Photographers are given 2 weeks to shoot photos for the latest theme and upload 1 to 3 of them to our Facebook page.

Our latest assignment was “Black and White.” The submitted photos that received the most attention from members of the group were those that had the simple basic requirement of a good image: a strong visual hook. Here’s a look at photos.


Let’s start first with one of the best black and white photographers in the group. Helio consistently shoots great photos, and this one is one of my favorites from him. The hook of course is the faceless foreground character which is accented by everyone in the photo being faceless as well.

The first thing that catches my eye with Monika’s photo is the couple lying down on the floor. Juxtaposed with the nuns, its a clash of conservatives and free spirits. Excellent story in the photo.

The visual hook in Jimmy’s photo is repetition of the hands on the rail. One of the things about black and white is it doesn’t distract and keep everything simple. A black element placed on white or vice versa can easily make things stand out. Note that repetition in Jimmy’s photo.

Speaking of repetitions, check out this background by Enamul. This would be too much of a color clash if the photo is in color. Either way, the photo works well because of that background.

But wait! There’s more! Here’s another example of repetition by Brenden. The triangles and the X mark is a nice look but the visual hook here is the repetition was broken by the figure. Interesting image of something we see or encounter in the everyday. The previous sentence pretty much sums up what street photography is.

Brad calls this photo “Surrounded.” This is an excellent example of isolation both literally and figuratively. When you have a clean background, it’s easy to pop out your visual hook.

Silhouettes is an easy way of making a visual hook. The gesture of the “ballerina” suspended in air looks really nice. Plus all the heads floating about. The trees n the sides completes the framing of the image. Excellent work by Kevin.

Michael’s photo here looks like a still from a movie. Every element is beautifully distanced from each other making each a visual hook in on themselves. The 1:1 aspect ration is to be appreciated as well. It works well here.

Carlos photo here makes me smile. The shape of the architecture, the windows, and the shadow of the rook looks like an over enthusiastic kid. The visual hook is the man walking across. Jolly looking image.

Speaking of things that can make you smile, if this puppy photo by Shaie doesn’t make you grin at least, you are heartless! Kidding aside, notice the texture of the wall, the wood frame, and the foliage. Overall, works as a black and white image.

Tom’s photo got the most feedback and likes for this assignment. The fog, the depth of field, and the characters in the frame is a perfect blend that worked with each other. The solitary figure on the right balances the frame from the very busy moments on the left side. This is something that will look well printed large.

Architecture is very interesting in black and white. However, to turn it into a street photograph, you need to have the candid moment. The biker in Helena’s photo is precisely that.

The downside of putting signage or words in a photo is that it can sometimes detract attention away from your subject. Unless there is a correlation or juxtaposition to the main subject. As usual there are no hard and fast rules in photography that’s why despite the signage, this photo by Harry still works. The signage didn’t detract attention away from the lone figure walking across the sign.

Chilun’s photo looks like it was lifted straight off a horror movie starring a kid lost in a carnival. Black and white works well to create the atmosphere and the composition shows a lot of depth. The image looks very clean as well as if everything was set-up and deliberately placed there. Kudos to Chilun for this one.

Everything falls together well for this image by Nic. I like how the eye would glide towards the woman, the tree, and then her environment. Good call on him to keep the shadow detail.

I’m assuming this is some sort of zipline but then again, black and white can make an image surreal. Tanya did so in this image. I don’t know what it is but as usual, putting black figures on a white background makes everything pop. The structure and lines also made everything rigid which works for this image.

Using black and white to elevate your visual hook is the name of this assignment’s game and OC got that one here. The man in the hole plus his perplexed expression seems as though it was detached from reality or added in a badly photoshopped manner. A nice and somewhat funny image.

Every assignment, I have that one image that if it was explained further, it will just ruin it. For this assignment, this photo by Gian is that one. So many things happening such as the gestures, shapes, and emotions. Good job!

Which photograph from this set would you pick as the best image? You can chime in with a comment below. If you’d like to participate in the next Streettogs Academy challenge, you can follow along on Facebook.

About the author: Angelo Gian De Mesa is a street photographer based in Pasig City, Philippines. He writes about photography for the Eric Kim Street Photography Blog and is the co-host of the Third World Linux podcast for Channel Fourteen. You can find his work on his website. This article was adapted from a post that first appeared here.