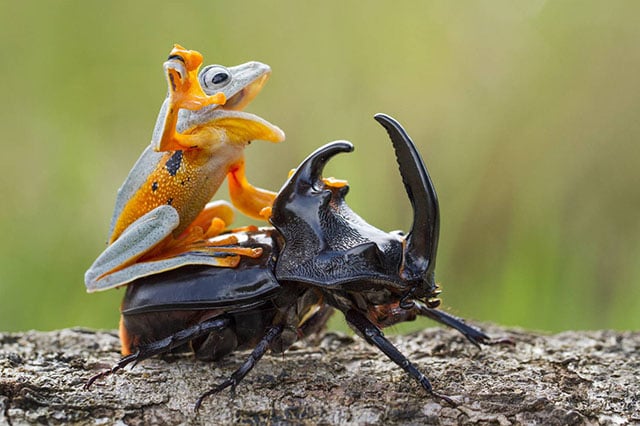 Photos of a frog riding a beetle have been flooding the Internet over the past month. Think it looks cute and adorable? Reactions to the series of photos have been split between blind praise and outrage over the authenticity of the photo-story and welfare of the subjects. So, did this scene really occur naturally as claimed? We don’t think so, and here’s why.

In compiling this article, we spoke to herpetologists (those who study amphibians and reptiles, including frogs and lizards), and particularly frog experts for their take on these photos. These are people who spent most of their lives studying frogs, and there are no better people who understand the anatomy and biology of frogs.

Question #1. Would the frog jump onto the beetle?

Giddy up! Photographer Hendy Mp captured this daring frog hop a ride on a beetle and it even stuck its front leg in the air cowboy-style. —Daily Mail

This frog, Rhacophorus sp., is nocturnal. In the day, it is not active and will not hop around, much less onto a beetle. Even if placed beside the beetle, it would remain indifferent to the beetle unless it were provoked or hurt… in which case, it would jump away rather than onto the beetle.

Question #2. Can the frog’s mouth remain open in so many of the shots?

Frogs could possibly open their mouths like what’s seen in the photos, but aside from when they are eating something, it is a sure sign of distress. The only time when the frog had its mouth open naturally is when a frog is incredibly distressed — like when it’s being eaten by a snake.

Question #3. Are the positions of the hands natural? 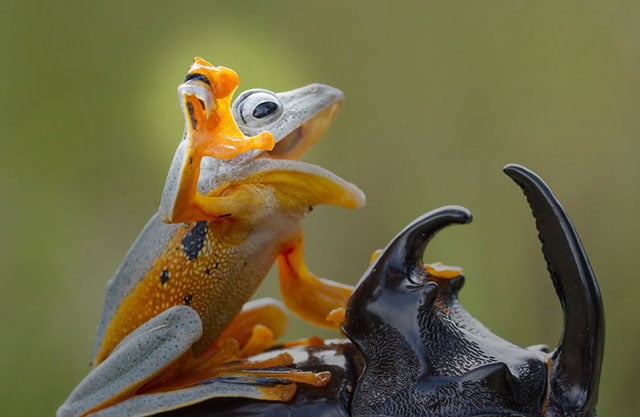 The fingers on the raised hand are in a very unnatural position and not possible on the frog’s own accord. It is like twisting a human’s fingers to awkward positions that are impossible without external force.

Question #4. Were the subjects discovered in the wild?

There is strong evidence posted by the photographer himself that the frogs and many of his subjects were captive animals (i.e. “pets”). Those photos are not published here due to privacy reasons.

Here’s one of the quotes from a herpetologist we spoke to:

I can’t stand these images. To someone very familiar with frogs, it’s really sad to see the poor frog in this situation. I don’t believe that these photos are of a naturally occurring situation. To me, they appear to be highly staged, and there is evidence that the frog is distressed. Frogs are so amazing without being used as props, it’s upsetting that they felt it necessary.

Staged photography is not prevalent only in certain countries. Sony Photography Awards 2014 shortlisted a similar and highly dubious entry from Europe.

How a supposedly prestigious photography award by a well-known brand shortlisted such an entry in the “Nature and Wildlife” category is inconceivable. However, at least this was clarified to be shot in a controlled environment during a workshop.

This article is not a personal attack against the photographers — each of them is talented in his or her own right. The purpose of this post is to discourage such genres of fake nature photography and to educate the public on the ethical questions involved.

We also hope that the various news sites, platforms and camera brands would STOP promoting these fake nature photos using BS stories. Nature is already intriguing and beautiful on its own, that staging such unnatural scenes is an insult to mother nature herself.

The next time you see a similar photo that claims to be natural, please share this article for everyone to understand the questionable ethics involved in taking such “perfect timed shots”.