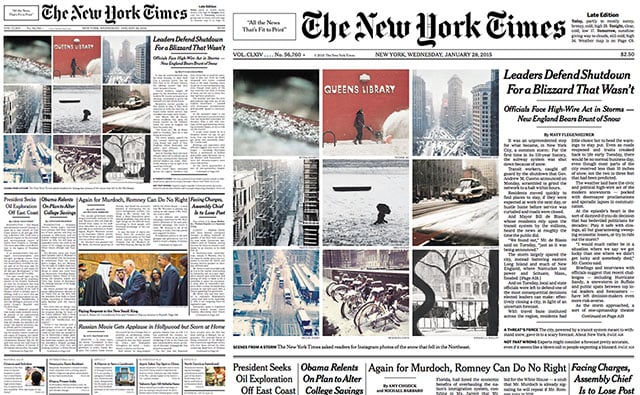 Yesterday’s front page of the New York Times featured a story about the snow that has been falling on the Northeastern United States. Accompanying the article and dominating a large portion of the page were 9 Instagram photos of the snow as snapped by Times readers.

Poytner points out that this appears to have been the first time the New York Times published audience-submitted photographs on the front page of its printed newspaper.

On Monday, the New York Times published an article that asked readers to share their Instagram photos from the snowstorm by tagging them with #NYTsnow. “We are continuously featuring a selection of photos on our site this week,” the paper wrote. Two days later, it selected 9 of the tagged images for featuring on the front page.

It appears the newspaper didn’t inform the photographers of the usage, and at least one of the featured shooters was surprised to learn of it. Jeca Taudte, whose photo of a boat being towed was one of the 9, writes in her photo’s comment section that she didn’t know her photo had been published until a commenter congratulated her: 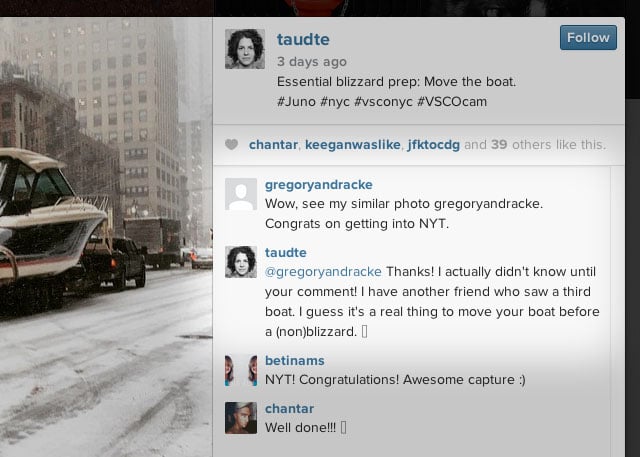 It seems that by tagging her photo with #NYTsnow, readers are in effect telling the New York Times that they are giving the paper permission to republish the submitted images on its website and in its printed edition. This may just be the way things are done as more media companies are diving deeper into the world of User Generated Content (UGC for short).

P.S. The NPPA reported earlier this week that people can tell the difference between a professionally captured photo and a UGC photo 90% of the time.