Zwier Spanjer recently purchased a DJI Phantom 2 camera drone and captured the video above on his first day of flying it outdoors. The flight didn’t turn out the way Spanjer planned.

As the drone was flying over a field in a small town, its battery became depleted and the Phantom began a slow uncontrolled descent to the ground. Unfortunately for Spanjer, it wasn’t actually ground beneath the drone, but rather a small body of water.

Realizing that he was about to lose his new $580 piece of equipment to the water, Spanjer quickly hopped in, waded over, and caught the drone with one hand just as it was about to hit the water. The onboard camera captured dramatic footage of the whole thing. 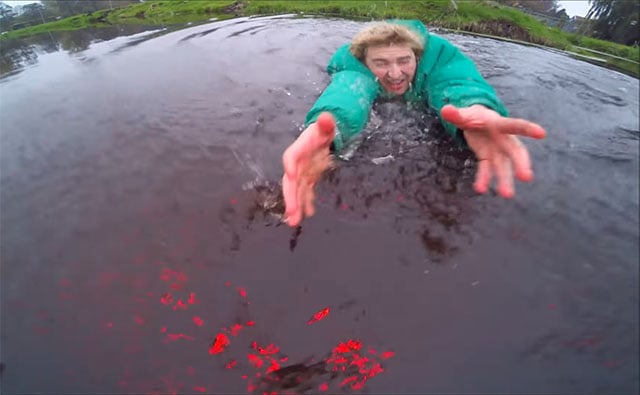 The video has since gone viral on YouTube, where it has become a top 10 most popular video at the time of this post. People are even beginning to remix the footage into wonderful new creations:

If you’d like to avoid this type of thing happening to your drone in the future, one thing you can do is create some DIY water landing gear using pieces of styrofoam.