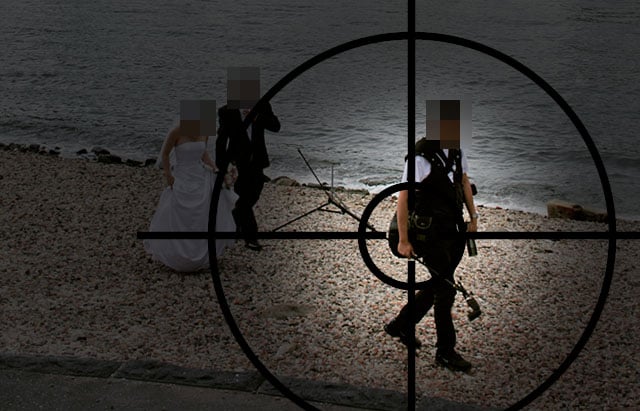 Wedding photographers beware: you could be a prime target for robbers due to the value of your gear. Just last year we reported that photojournalists in California were being targeted for their equipment, and now another crazy incident has occurred: a wedding shoot in Oakland was targeted this weekend by robbers who made off with $13K+ in camera gear… and all the wedding photos.

The Oakland Tribune reports that photographer Helene Paz was shooting with her husband and three videographers at 4:30pm this Saturday outside Oakland High School, where the bride and groom first met. The post-wedding shoot was just wrapping up, and the whole group was walking back to their cars.

All of a sudden, three men confronted the photographers, and one of them pulled out a gun and pointed it at Paz’s head. After going through the victims’ pockets and cars, the three robbers made off with cameras, photographic equipment, and an iPhone.

The equipment was valued at $13,500. The photographers have insurance that covers the loss, but the videographers didn’t.

What’s irreplaceable, though, is the photo and video data stolen with the gear. “I’m hoping people may know something … that we’ll actually get the pictures back […] That’s all we really care about for the bride and groom,” Paz tells the Tribune.