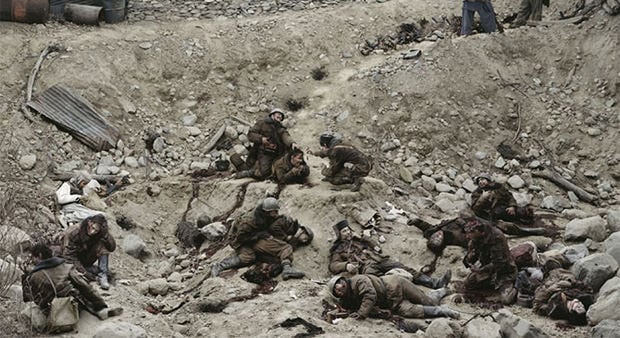 A fake war photograph by Canadian artist Jeff Wall was sold yesterday at Christie’s in NYC for a staggering $3.6 million — a new record for Canadian photographers and the third highest price ever paid for a picture. The 1992 photo, titled Dead Troops Talk, was captured inside a suburban Vancouver studio using models, borrowed military outfits, and fake blood. It shows a group of dead Soviet soldiers chatting with one another during the Soviet-Afghan war of 1986. The sold image is one of two copies that exist, and considered Wall’s most important creation. Interestingly enough, Andreas Gurksy (who holds the record for most expensive photo) cites Wall as an influence.

(via The Vancouver Sun)

Cops vs. Cameras: Widespread Camera Use and the Rise of The New Media