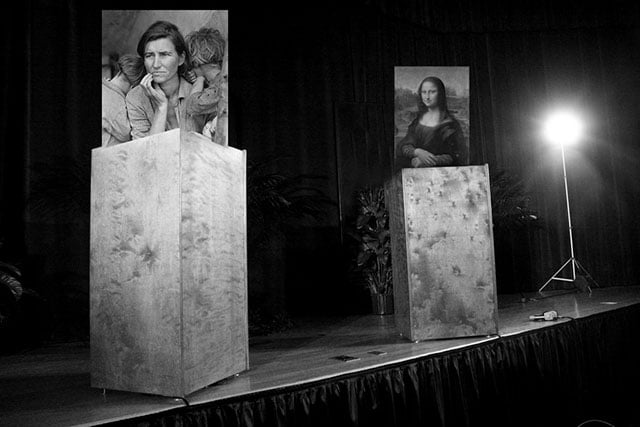 Grab your popcorn, folks. There’s an interesting royal rumble happening over at The Guardian between columnists Sean O’Hagan and Jonathan Jones. The main question on the table is: “Is photography art?”

It may seem like a silly question to some (or many, or most), but the debate has so far spanned multiple columns on the pages of The Guardian.

The debate started with a column Jones — an art critic — wrote back in November, titled, “Flat, soulless and stupid: why photographs don’t work in art galleries” (we also reported on it at the time). In the piece, Jones argues that photos don’t deserve a place in galleries next to paintings:

It just looks stupid when a photograph is framed or backlit and displayed vertically in an exhibition, in the way paintings have traditionally been shown. A photograph in a gallery is a flat, soulless, superficial substitute for painting. Putting up massive prints is a waste of space, when the curators could provide iPads and let us scroll through a digital gallery that would easily be as beautiful and compelling as the expensive prints.

That opinion was met with a torrent of angry comments by fans of photography who disagreed with Jones’ stance. The response didn’t sway Jones’ stance one bit. Yesterday, after the reported record-breaking sale of Peter Lik’s “Phantom” photo for $6.5 million, Jones took another swing at photography.

In a piece titled, “The $6.5m canyon: it’s the most expensive photograph ever – but it’s like a hackneyed poster in a posh hotel,” Jones writes,

Photography is not an art. It is a technology. We have no excuse to ignore this obvious fact in the age of digital cameras, when the most beguiling high-definition images and effects are available to millions. My iPad can take panoramic views that are gorgeous to look at. Does that make me an artist? No, it just makes my tablet one hell of a device.

[…] beauty is cheap if you point a camera at a grand phenomenon of nature […] If this is the most valuable “fine art photograph” in history, God help fine art photography. For this hollow and overblown creation exposes the illusion that lures us all, when we’re having a good day with a good camera – the fantasy that taking a picture is the same thing as making a work of art.

Today, a response piece was posted in response to Jones and in defense of photography. It was written by Sean O’Hagan, another Guardian journalist who specializes in the subject of photography, and is titled, “Photography is art and always will be“:

Several things are wrong about Jonathan’s reasoning, not least that he still thinks painting is in some sort of competition with photography. How quaint. He also seems to think that all photography is derivative of painting. This is plainly not so.

[…] Photography is as vibrant as it has ever been – more so in response to the digital world, which Jonathan mistakenly thinks has made everyone a great photographer. It hasn’t. It has made it easy for people to take – and disseminate – photographs, that’s all. A great photographer can make a great photograph whatever the camera. A bad one will still make a bad photograph on a two grand digital camera that does everything for you. It’s about a way of seeing, not technology.

Update: A commenter named Chris points out that Jones authored a piece just last year titled, “Photography is the art of our time“:

Photography is the serious art of our time. It also happens to be the most accessible and democratic way of making art that has ever been invented. But first, let’s define photography.

[…] photography that meets the critieria of the art world is just a tiny sliver of the camera’s artistic riches. From news images to the Hubble telescope, Photography is the art of real life – however manipulated. And real life creates true art.

Image credits: Header image based on photograph by Gage Skidmore