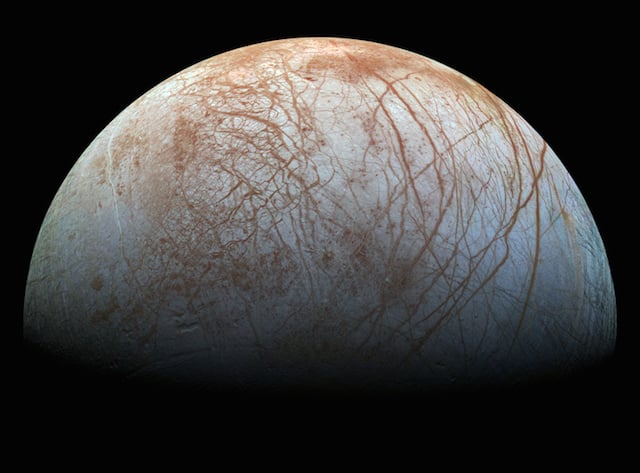 Need a bit more awe and wonder in your life? Look no further than the newest image released by NASA’s Jet Propulsion Laboratory. A high-res reprocessed color view of Jupiter’s moon Europa as captured by the spacecraft Galileo in the late 1990s, the photo “shows the largest portion of the moon’s surface at the highest resolution.”

According to the JPL, the new image was created by assembling Galileo’s near-infrared, green-filtered and violet-filtered photos, “into a realistic color view of the surface that approximates how Europa would appear to the human eye.” The resolution of the full-res shot comes out to about 2 miles per pixel.

Here’s a closer crop of the surface from the full res JPG: 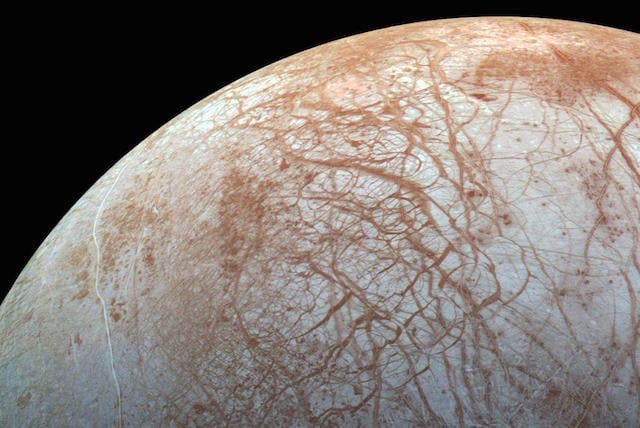 Here’s the JPL‘s explanation of what you’re looking at:

Color variations across the surface are associated with differences in geologic feature type and location. For example, areas that appear blue or white contain relatively pure water ice, while reddish and brownish areas include non-ice components in higher concentrations. The polar regions, visible at the left and right of this view, are noticeably bluer than the more equatorial latitudes, which look more white. This color variation is thought to be due to differences in ice grain size in the two locations.

To find out more, download the image as a wallpaper, or play around with the full-res JPG and TIFF files, head over to the JPL website by clicking here. And if you’d like to see more from Galileo, click here.

Inside the Warrior: Striking Portraits that Reveal the Masculine Side of Yoga