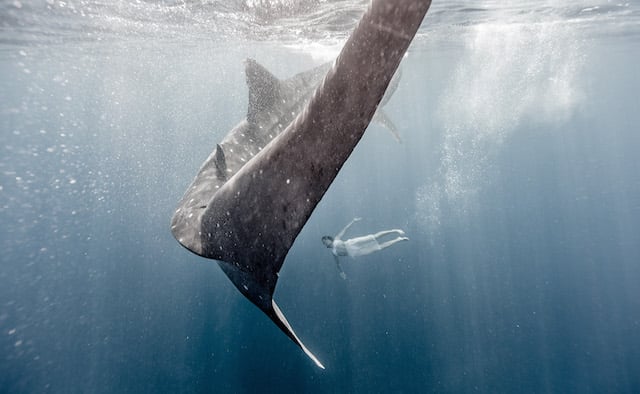 In August, I undertook an exciting personal project, an attempt to create underwater fine art images of a beautiful swimmer arcing alongside enormous whale sharks. After a busy year of shooting, I’ve had a welling desire to create imagery that speaks to my deepest soul; and to forge a large-format print for my house.

Now that we’ve released the photos, I wanted to share more details about how I captured the images. 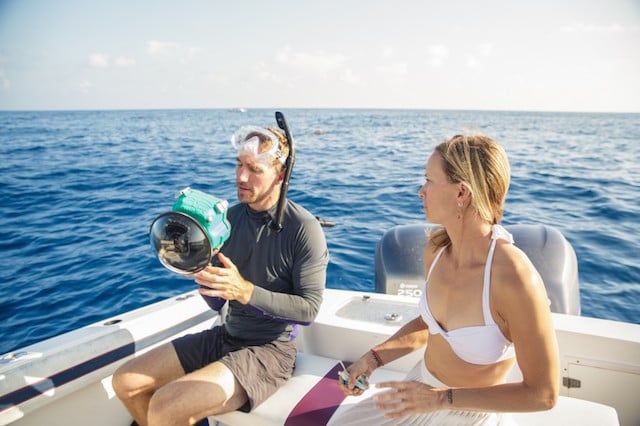 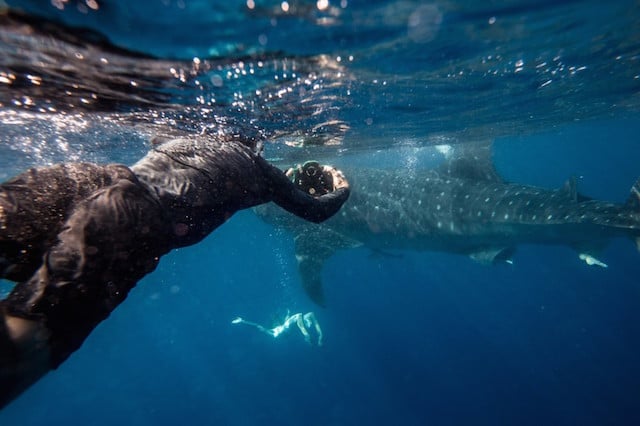 First, the project is a co-creation with the swimmer model Ashley Mosher. I chose Ashley for the project as she is a former competitive swimmer and has a beautiful grace that is only enhanced when she enters the water. However my vision for the compositions made for a challenging setup for Ashley and me — essentially, I wanted Ashley to be rising up from the deep blue, below the shark, and arcing gracefully below it.

The images could not look like Ashley was simply swimming down from the surface to try to get close to the shark — that would look too pedestrian, in my opinion. For the images to succeed emotionally, she needed to be a part of the fathomless deep, meeting the the shark from below. We chose a white skirt and top for her so she would reflect the natural light at those depths.

On our first day on the boat, my family came along to share in the snorkeling with the sharks (my wife, Megan, and I have kids who are 6 and 8 years old) — this was a lifetime memory in itself! Also, Ashley and I began a series of test setups. All of us were taken aback by our first encounters with the whale sharks. They are lithe, huge creatures; quiet and solemn.

Ashley and I were also suddenly intimidated by our photo ambitions. The sharks moved more quickly and erratically than we had anticipated. (For some serenely optimistic reason I thought it would be “easy” for Ashley and I to position ourselves perfectly with the sharks …)

For us to have any chance of success, Ashley had to first swim over to, and in front of, the moving shark; and then, despite being winded from the swim, she had to draw a big breath and plunge deep underwater, swimming hard to position herself perfectly below the shark — all without mask, snorkel or fins. And then, only then, could she begin the graceful dance; she arced and twirled alongside the shark until her searing lungs forced her, gasping, to the surface.

Meanwhile, I had only snorkel gear, as scuba gear is not allowed with the whale sharks in Mexico; so I too was quite limited in my time underwater. I kicked hard to align myself alongside the shark’s tail fin — it was here that the shark often looked most dramatic through the Canon 14mm lens. I fought to swim through the backwash created by the shark’s powerful tail fin. Other times I dove deep below Ashley and the shark, to try to capture them silhouetted against the sun rays.

After our test day, I felt like we had less than a 50 percent chance of success for the shoot day — the notion of aligning Ashley, the shark and myself in just the right position, and in a pose of grace, seemed almost beyond our capabilities.

Yet this project was too personal to compromise on our creative process. That is, I didn’t want to composite the images or reposition Ashley within the frame. I wanted our photographs to reflect the true dance between Ashley and the shark. It would have been easy for me to shoot images of the sharks, and then to shoot Ashley separately in various poses underwater; and then composite the two frames in Photoshop. All the images here are one frame, the real moment.

On our shoot day, we departed before dawn and I asked our boat captain for permission to stay out as long as we needed to accomplish the shoot. After an hour’s journey and another 30 minutes of searching, we found a group of around 40 whale sharks (!) feeding together in the cerulean Caribbean water. Ashley donned her white skirt; I snapped the clamps on the Aquatech underwater housing around my Canon 5D Mark III; and we jumped into the sea. 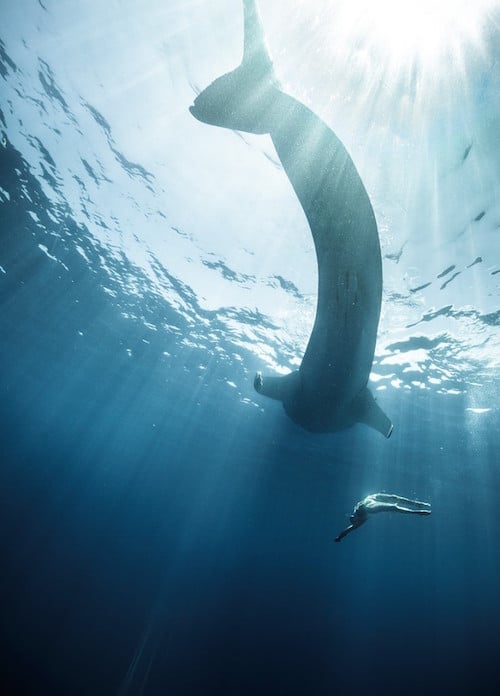 Ashley gave everything she had to the shoot — and she is a swimmer who competed in the U.S. Olympic trials. We spent over 4 hours in the water, with numerous false starts and missed moments, all while drifting amongst the most stunning creatures I have ever encountered. And, Yes! We were blessed with six or eight magical setups.

Which photo will I print for my wall? I’m still deciding. Each one has a certain spirit to it, and I am enjoying the process of listening to each image’s voice. I’ll start by printing a few of my favorites on 3-by-5-foot canvas — I am always amazed how the energy of a photograph transforms in the journey from a computer screen to a large-format print. As a print it becomes alive, a moment in time you can enter and explore.

I want to thank my coworker Kate Rolston for shooting behind the scenes and for bringing boundless inspiration to the imagery — a few of the photographs in the online gallery are also hers! Canon and Aquatech kindly helped make this project possible as well — I shot with the Canon 5D Mark III and 14mm lens inside the Aquatech Sport Housing. Ashley Mosher, of course, carried this project with her swimming prowess and graceful dance. Thank you, all!

About the author: Commercial photographer and director Tyler Stableford has earned a worldwide clientele for his work. Men’s Journal named him “One of the Seven World’s Greatest Adventure Photographers.” Tyler is one of Canon’s prestigious Explorers of Light, and his work has won dozens of top photo and film awards including the cover of the Communication Arts Photo Annual. Tyler’s passion for storytelling extends beyond commercial work—he and his staff volunteer to shoot at least one week per year for nonprofits. Tyler is a graduate of Dartmouth College. He lives in the Aspen valley with his wife and two children.

You can find the final Into the Deep images here, and a behind the scenes video of the shoot here. And if you’d like to keep up with Stablefor’s work, be sure to visit his website. This article originally appeared here.