OK Go is known for its creative music videos that often feature single takes and innovative camera techniques, and the band’s latest video continues that trend in an impressive way.

Released today, the “I Won’t Let You Down” music video has already amassed hundreds of thousands of views on YouTube. Give it a watch above and you’ll quickly see why.

The video features self-balancing unicycles and an army of dancers clutching umbrellas of different colors. What’s crazy is how seamlessly the camera moves from ground level to birds-eye-view thanks to the camera-equipped drone.

Harley Brown over at Billboard spoke to the band and Japanese director Morihiro Harano for some behind-the-scenes details into how the project was done. 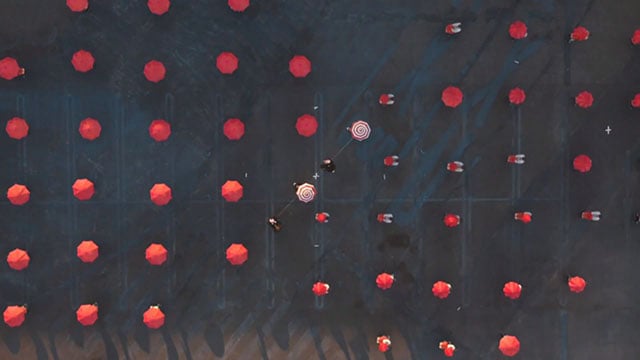 Brown reports that the entire video was done in one continuous shoot, and that it took 50 or 60 tries to get the final version.

You’ll notice that parts of the film features playback at double speed. During these portions, the dancers listened to the song being played at half speed through enormous speakers, allowing them to perform complicated movements with precision. 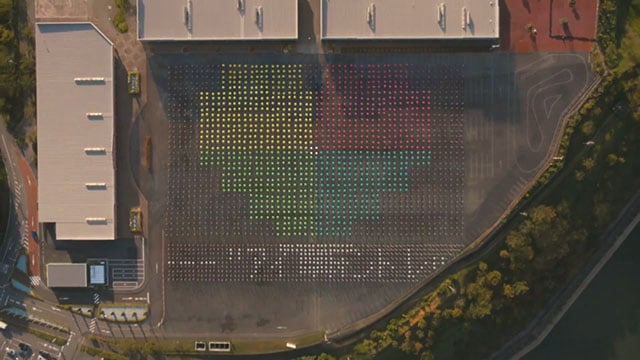 For the final shot, which features umbrellas making up “pixels” of a giant human-powered display, was shot by flying the special camera drone about half a mile into the air and controlling it manually and with GPS. The shot features over 1500 volunteers riding the Honda scooter chairs (you can see them waiting on the sidelines before the camera starts rising into the air).

During the filming of the video in Japan a couple of months ago, band frontman Damian Kulash shared a number of behind-the-scenes glimpses through his Instagram account:

If you want to make a video, you need a lot of diagrams.

Our coworkers watching the playback.

Here’s what appears to be a glimpse of the drone and camera:

Hopefully OK Go releases a behind-the-scenes video that offers a closer look at how it all came together.

Update: Here’s a short behind-the-scenes video that offers a little glimpse into how things were created: