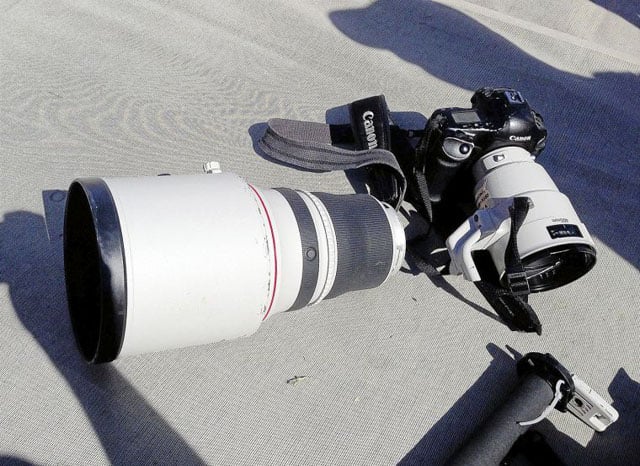 One of the stranger stories that occurred in the world of photography this past weekend was when Oklahoma football player Sterling Shepard crash landed on a Canon telephoto lens, snapping it into two pieces.

Now that the dust is settled, the photographer has come forward with his account of the incident and an apology to the player.

It turns out the man behind the camera was Tulsa World photojournalist Mike Simons. In an article published today, Simons writes that he “felt horrible” that his camera gear caused Shepard pain. He also addresses comments about where the gear was being kept at the time:

Some comments have been made about camera gear lying by my side. I have always felt that flat on the ground is the safest place for gear that isn’t being used at that particular moment. It is where most photographers keep their gear. It allows me to move out of a player’s way quickly. And there are no monopods (the metal poles on the bottom of our cameras) sticking up needlessly. It has worked perfectly for 26 years. On Saturday, while lined up with dozens of other photographers in the designated photo area, it didn’t.

The carnage from my end of this incident was that a Canon 400mm F 2.8 lens was broken in half. The lens sells for $10,499. It’s a lot of money, but nothing in comparison to a player’s safety.

One of the critics of Simons was Oklahoma coach Bob Stoops, who argued after the game that photographers shouldn’t be allowed to have as much gear on the sidelines:

Here are a couple shots Simons managed to capture as Shepard hurtled toward him: 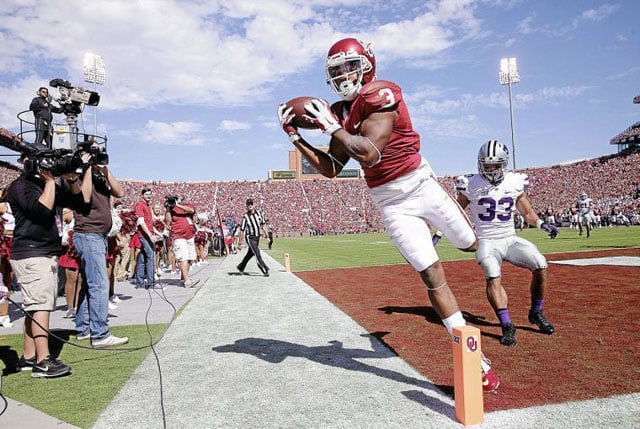 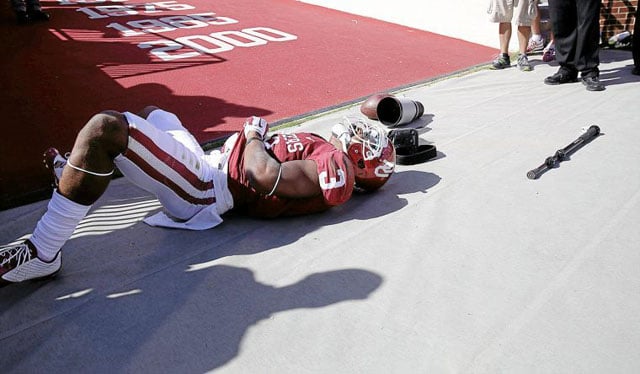 In case you missed it over the weekend, here’s the short clip showing what happened:

You can read Simons’ full article here, and find a few more photos he shot here.