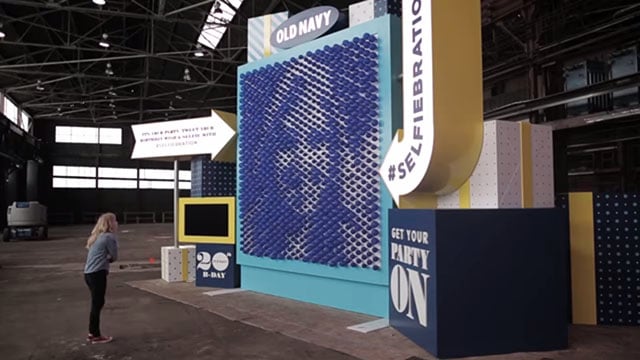 To celebrate its 20th birthday, Old Navy has created what it’s calling a #Selfiebration machine. What is a Selfiebration machine you ask? Why, it’s a 15 foot contraption that turns Twitter selfies into ephemeral pieces of balloon art, à la halftone stylization.

There will be two of these #Selfiebration machines on display: one in in New York City’s Times Square on October 22nd, and the other in Los Angeles’ Hollywood & Highland Center on October 25th.

The campaign will run between October 16th and 25th, giving you just enough time to get your submissions in before the #Selfiebration machines go on display on their respective dates.

You can see the machine in action in the video below:

To get your self-portrait onto the machine, all you need to do is tweet a photo to Old Navy with #Selfiebration added on as a hashtag. Once you’ve done that, it’s up to the machine to fill up nearly 1,000 balloons with compressed air to create your selfie ‘print,’ which will be displayed for 30 seconds before cycling to the next.

Don’t fret if you aren’t around to see the balloons make your portrait though. Old Navy will send you an animated GIF of the #Selfiebration machine making its masterpiece of you just in case.

And just in case you’re wondering what went into creating this oddest of temporary print machines, and how it actually works, the video below lets you in on the details. In it, they briefly go over the specialized machinery, balloons and process that goes on behind the scenes to create your #Selfiebration.

Head on over to the Old Navy website to read more on the machines and see featured submissions already chosen. Or… you know… Tweet a selfie at Old Navy.