One of the most useful features built into the DJI drones is something called ‘Return to Home.’ If the drone gets out of range of your controller, instead of dropping out of the sky, it automatically uses GPS data to zoom back to the launch point.

Cool right? Only one problem… what if there’s a massive cliff face in the way? Well, in that case, the video above happens.

Captured by the folks over at Every Angle Films, it seems they were in the process of shooting a gorgeous sun rise in Arizona when a several hundred foot tall rock formation got between them and their DJI F550. Cue ‘Return to Home’ feature and drone-crunching crash into said rock formation. 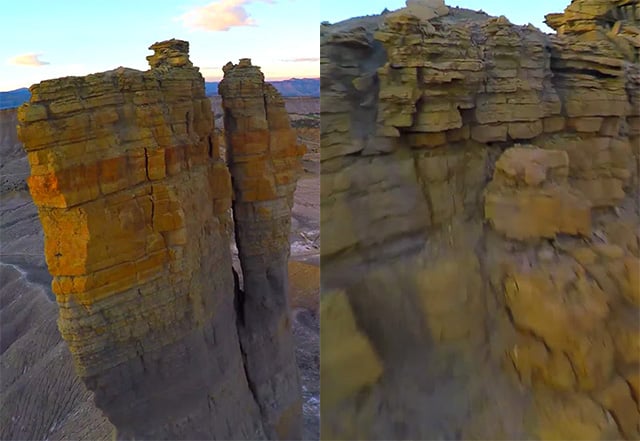 The lens was damaged, good scratch on the bottom that was noticeable in later videos. Drone’s electronics were all fine, smashed up the arms and propellers which he has plenty of spares for. This isn’t his first time doing this, he did the same thing last winter and found the GoPro a few months later still in perfect condition without the case. He has the video on his page, it’s pretty cool.

You can find that lost-and-found video here. And if you’re wondering how to avoid this situation the next time you’re out shooting, Redditor SodaAnt said they set their GPS fail-safe to fly up 100 feet before returning to home. Pretty smart. That would have turned this cringe-worthy (but kind of funny) crash into a beautiful sweeping shot above the rock.

Special Printer Brings SnapChat Into the Real World, Spits Out Prints that Burst Into Flames