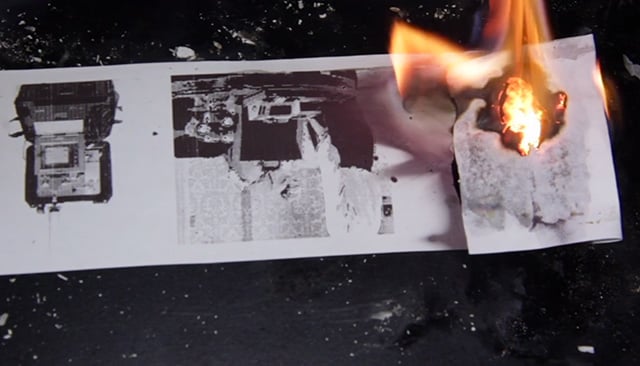 Thanks to artist Diego Trujillo Pisanty and his project This Tape Will Self-Destruct, there is not a real-world printer that creates self-destructing photos ala. SnapChat.

The mechanism behind the art project printer is simple. As Cold War era photos are being printed on the paper, a piece is coated with glycerol and potassium salt. Shortly after you look at what’s been printed, that patch bursts into flames, engulfing the full printout shortly after.

Watch the printer in action below:

In the project’s description, Pisanty explains that it’s a commentary on, “the intersection between our current techno-political status and Cold War spy fiction.”

In July 2013 the BBC reported that a Russian security agency would revert from using computers to typewriters in order to avoid sensitive document leaks. The following January The Guardian released a video of its employees destroying the computer equipment that stored the files provided by Edward Snowden. The release of the NSA files will likely be part of this decade’s history, however the debate around mass surveillance and government secrets for the sake of national security seems more related to the Cold War than to modern day living.

You can see more photos of the printer and find out more about the project and Pisanty’s work both by clicking here.