When photographers find their images being used in online publications without permission, there’s often not much they can do aside from sending out emails requesting payment, credit and/or a takedown. When the photos in question are hotlinked, on the other hand, it opens the door to some good ol’ shaming.

That’s exactly what photographer and Reddit user FrancescaO_O was able to do recently after she found the Huffington Post stealing her photo.

It appears that lately the Huffington Post has been using photographs shared by Redditors without permission or credit, directly hotlinking the images from the image host Imgur. Instead of reaching out to the content owners, the publication simply includes a link back to the original Reddit post in which the photo was found.

FrancescaO_O was recently notified by a fellow Redditor that Huffington Post was using one of her photos in this manner (In this article. An archived screenshot is shown above). She then contacted the Huffington Post to let them know they could use the image so long as they properly credit her.

To her dismay, the Huffington Post responded with a refusal to credit the image, telling her that that since it was hosted on Imgur, she would have to delete the image herself if she wanted it removed.

Rather than removing the image, Francesca decided to have a little fun at HuffPo’s expense to teach them a lesson. Since HuffPo was embedding the image straight from the Imgur link, any edits made to the image would subsequently show up in HuffPo’s article, without their knowledge.

Knowing this, Francesca credited the image herself — and shamed HuffPo in the process — by overlaying a massive message onto the image. 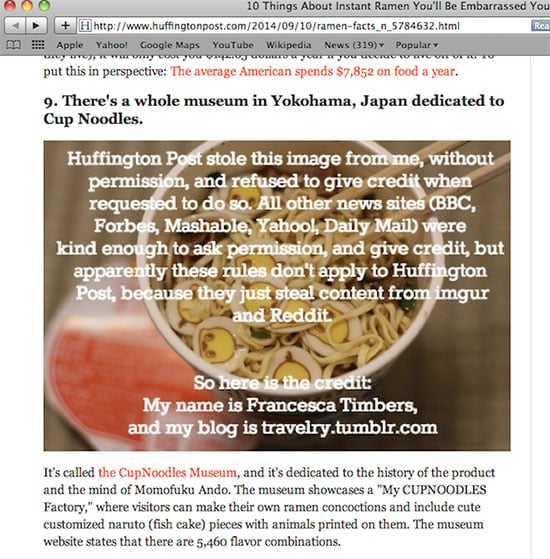 The result, as you can see in the screenshot above, is one of the most beautiful pieces of trolling we’ve come across. Short, sweet, and to the point. Sadly, HuffPo discovered this change not long after and quickly swapped out the photo for a Getty image.

A correction has also been published at the bottom of the post, but it does not mention the real reason behind the image swap:

CORRECTION: A previous version of this article incorrectly identified the picture of the ramen at the museum as being at the Shin-Yokohama Raumen Museum in Osaka. It is, in fact, at the CUPNOODLES Museum in Yokohama. Maruchan’s “Oriental” and “Chili” flavors of Top Ramen were also incorrectly described as vegetarian. Only Nissin’s flavors are vegetarian. Maruchan’s “Oriental” and “Chili” flavors are not. Language has also been amended to address competing theories on the etymology of “ramen.”

The photo may be gone now, but we’re guessing at least one person at HuffPo learned a lesson about stealing photos through this exchange. Well… hopefully.