Words simply won’t do this ad justice, and that ought to be the beginning and end of this post. But just in case you need further encouragement to click play, or you’d like to find out more about this video, you can read on.

Created by award-winning director Martin Stirling — the same mind behind this powerful ‘one second of video per day’ anti-war ad from we shared back in March — the video plays the slow-motion bombing of a school playground in reverse, and is a feat of cinematic brilliance. 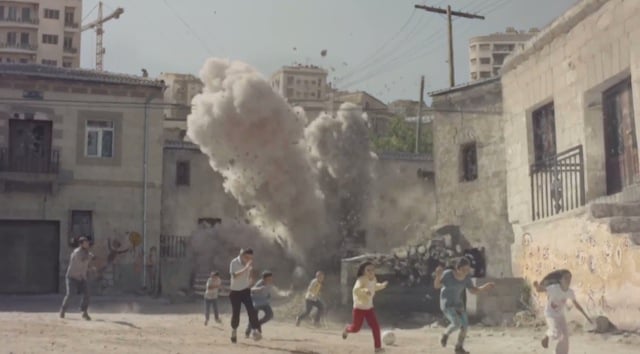 The film hopes to draw attention back to the conflict in Syria, where civilians are still dying by the thousands and the killing is only getting worse.

“The killers, destroyers and torturers in Syria have been empowered and emboldened by the international paralysis,” says the the UN High Commissioner for Human Rights, and that paralysis threatens to turn into a complete absence of attention altogether. This is what “In Reverse” hopes to, for lack of a better word, reverse. Stirling himself explains that he couldn’t say no to the project, despite being overwhelmed with other work as it was:

I really had no choice about whether or not to make this film. I was swamped by a couple of projects and I tried my best to walk away but found it impossible. Whenever I thought about not making this film I was haunted by the images and stories I had come across in preparation for the Most Shocking Second A Day Video earlier in the year. This film felt like an appropriate follow up to that first one – it was creatively and stylistically different in a way which would hopefully capture the attention of a wide audience and the hearts of influential policy makers. 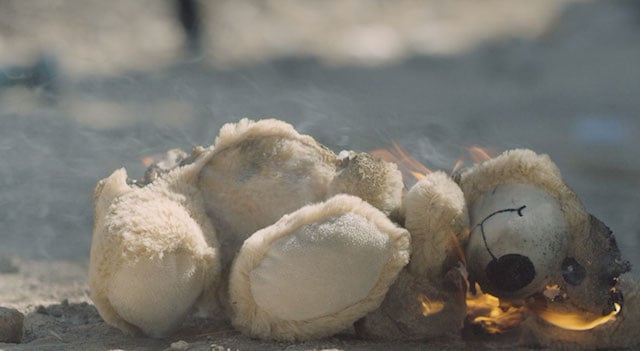 The images are heartbreaking, and certainly not easy to watch, but it gets it message across in powerful, impossible-to-ignore terms.

We’ll end this post the way Stirling decided to end the video. As the bomb receeds back into the sky where it came from, the caption reads: “We can’t reverse what’s happened in Syria, but we can change how the story ends.”

To find out more and help support the outcry to stop bombings of Syrian civilians, visit the #WithSyria website by clicking here.

Image credits: All photographs provided by the #WithSyria campaign