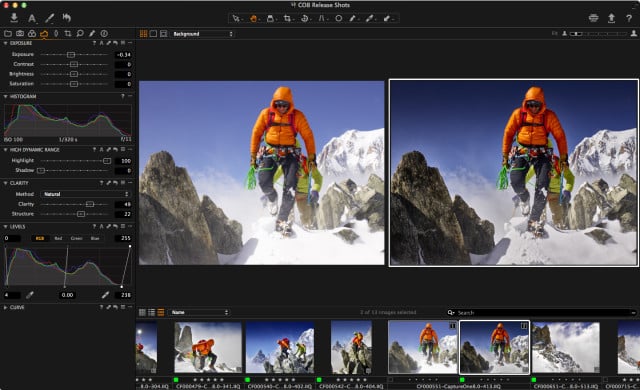 Phase One is making the most of Photokina by announcing a complete overhaul to its popular Capture One Pro software. Now on version 8.0, the updated program not only improves upon its former self, but also looks to squeeze in more of the market share by enticing ex-Aperture users who are looking for simple migration to a semi-familiar interface.

The generous update includes the ability to more effectively organize your photographs into various Catalogs, taking a cue from Lightroom. It has also upped its game by offering live view capabilities when a camera is tethered.

As for effects and corrections, Capture One Pro 8.0 includes more robust film grain options, local adjustments, better perspective and distortion correction, as well as an updated layers option that lets you more effectively create, clone and edit your images one layer at a time.

Naturally, the update ensures you will be doing this all much more efficiently through improved performance. Whether it’s tethering a camera, editing a couple hundred RAW photos or moving between catalogs like it’s your job, the performance improvement is done in part thanks to better utilization of OpenCL and other performance tweaks.

One of the main components to the update though is the ability to more effectively migrate information into Capture One Pro 8.0; particularly from the now-defunct Aperture that many users are still holding onto until they find an alternative.

That being said, Phase One is taking a page right out of Adobe’s book by offering up a subscription model as well.

For $10 per month with a 12-month commitment, you receive the complete program and any updates released in those 12 months. Unlike Adobe, however, you can still buy the software outright for $299. Those upgrading from previous versions of Capture One Pro can upgrade for $99.

Below are a number of tutorial videos provided by Phase One that will give you a better look at what the update offers.

Head on over to the Capture One Pro website for more information, and if you’d like to grab yourself a copy, you’ll find links to both the subscription platform and outright purchase there as well.