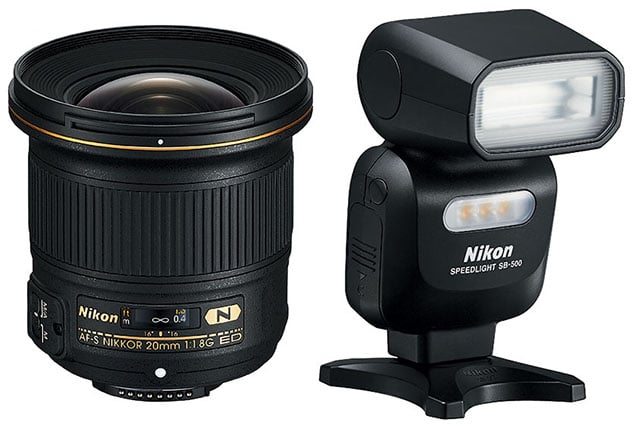 The new Nikkor 20mm f/1.8 is the latest addition to Nikon’s lineup of f/1.8 lenses for full frame FX-format cameras. It’s the first time the company has released an f/1.8 aperture on a ultra wide angle lens.

The lens features a 94-degree field of view on full frame cameras, making it a nice option for things like architecture, interiors, landscapes, and group shots.

Features include “whisper quiet” and speedy autofocus, an internal focus design, and Nikon’s Nano Crystal Coat on the front element to reduce ghosting and flaring. The new SB-500 Speedlight is designed for both photographers and videographers. It covers a wide 16mm and 24mm on full frame and crop sensor, respectively.

On the backside is a simplified interface for easy controlling, and the head of the Speedlight can swivel vertically 90-degrees and rotate horizontally 180-degrees. It also features a powerful LED light (100 lux) that can be operated independently from the flash for lighting up a subject or scene.

For remote lighting, the flash can be used in Nikon’s Creative Lighting System (CLS) flash system with two-group/two-channel control. Power-wise, the flash is powered by just two AA batteries instead of four, allowing it to be lighter and more compact.