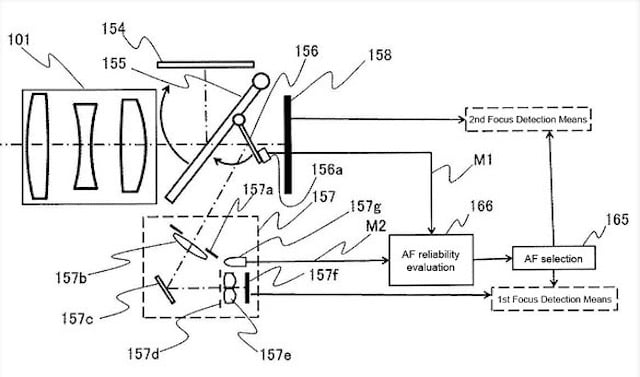 As more and more camera manufacturers are taking the mirrorless route to their product lineup, there are still plenty of companies dedicated to producing top-of-the-line DSLRs. And while the mirrorless market is seeing a massive jump in specs with each passing year, the DSLR market is working to keep up with their less mechanical counterparts.

Canon is looking to tackle the growing issue of balancing the focusing capabilities of DSLRs with the mechanical mirror setup that limits what they’re currently capable of. And the above patent shows off just how they might achieve that.

The solution involves the use of Canon’s phase-detection autofocus sensor. After you frame the scene and press the shutter – sequencing the burst of photographs – the patent details a process by which the phase-detection pixels will handle the autofocus workload.

This means that rather than having to lift and lower the mirror for each exposure, the mirror stays in it’s upright position, letting the sensor handle the workload. In such a setup, the frame-rate could dramatically improve from where it currently stands with DSLRs, giving you the best of both worlds – DLSRs and mirrorless.

Rather obviously, this particular method would require some sort of hybrid optical/electronic viewfinder, capable of instantaneously swapping between the two. However, the patent doesn’t so much as hint at the accompanying technology, so for now we’re still left in the dark.

That being said, there’s still the possibility this will never see its way into a Canon camera at any point in the future. It wouldn’t be the first time Canon patented a file that never came to fruition and it certainly won’t be the last.

But it does go to show that while mirrorless cameras are becoming more and more enticing, manufacturers are ensuring DSLRs are right on their tail in every regard.

Pro Tip: Some Airlines Have a Special Luggage Allowance for Media So You Can Pack More Gear