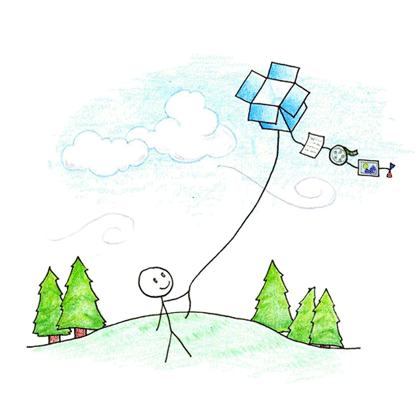 TL;DR: If you are using Dropbox as a sole backup of your files, think again. Without making a mistake, you might lose your files.

I started using Dropbox back in 2009 and have always loved the service. Over time, I kept moving more and more files to my Dropbox folder and eventually had to upgrade to the Pro plan to keep up with the space requirements. In particular, I moved there all of my photos in order to be able to view/share them online and also to have them backed up.

In April of this year, a hard drive in my laptop was running low on space so I decided to use the Dropbox’s Selective Sync feature to unsync some large directories from the laptop. Because there was never any problem with the service and also because it’s already the year 2014, I thought it might be about time that one can trust a cloud-based storage service and use them as a sole backup of their files. Boy, I was wrong.

On April 29th 2014, I opened the Selective Sync dialog, unchecked directories called 2003, 2004, …, 2014 from the Photos folder (and few other directories) and clicked the ‘Update’ button. After that, the Dropbox client froze and didn’t show any sign of life for a couple of minutes, so I decided to kill it and restart it again. These directories are large and they might be too big of a bite for Dropbox, I thought, and unsynced them one by one instead.

Everything worked well, the directories disappeared from the local hard drive, but they were still available on Dropbox’s website. All good. 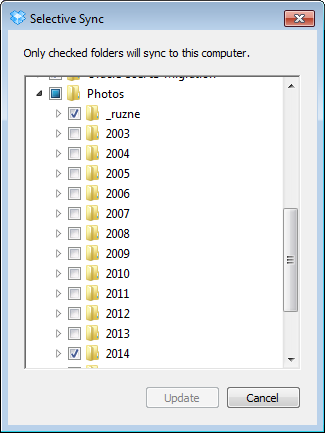 About two months later when I was preparing for a defence of my PhD thesis, I was looking for an old presentation but couldn’t find it. The directory was there but it was empty. I would have never deleted these files, something must have gone wrong.

I contacted Dropbox support, who then broke the news to me: there was a delete event of 8343 files from 2014-04-29 at 14:57:30 GMT (UTC). Looking at the log record from this event, I realized most of the missing files were my photos! All the directories were still in place but many of them were empty, as if Dropbox randomly deleted some files and left some others intact. I was devastated. All those memories and the effort with collecting and organizing the photos… gone.

From all this information it seems that Dropbox client first deletes files locally before it informs the server about the new selective sync settings. Consequently, if the client crashes or is killed before the server is contacted, the files remain deleted without any trace. After the client restarts again, it only sees there are some files missing and syncs this new state with the server.

Unfortunately for me, Dropbox only keeps a copy of deleted files for 30 days (unless you pay $40/year for some Packrat feature) and I found out about this event after two months.

For me it’s most likely over, there is nothing I can do now, maybe try to get some photos back from my friends who went on the same trips… Anyway, I decided to share this story publicly for three reasons:

Update (7/30/14): Yesterday night I got an email from Dropbox saying that they worked with their engineering team and were able to restore 1463 files. Also I received some credit for my future use of the service. Better than nothing.

PS: At least I defended my PhD thesis even without that lost presentation, but the photos are gone nonetheless.

PPS: For the sake of completeness, you can read a complete record of my communication with the Dropbox support by clicking here and scrolling to the bottom.

About the author: Jan Čurn is a Ph.D. student in the Distributed Systems Group of the Department of Computer Science at Trinity College Dublin and a CTO at VirtualRig Studio, an application for creating realistic motion blur for professional car photography. You can learn more about Čurn by heading over to his website or following him on Twitter. This article originally appeared here.