A couple of kayakers, believe to be a father and daughter, had an unbelievable encounter with some playful whales in the waters off the coast of Puerto Madryn, Argentina. They captured the entire thing in a GoPro video that has since gone viral, but the footage has sparked serious criticism from authorities and those who capture professional footage and photos of these gentle giants.

On one level, the footage seems to capture a wonderful interaction between a pair of curious humans and a gentle whale, and if you want to enjoy it as such you’re more than welcome to. But anybody who has ever professionally photographed or videoed whales knows that the pair were breaking every rule in the book and endangering themselves in the process. 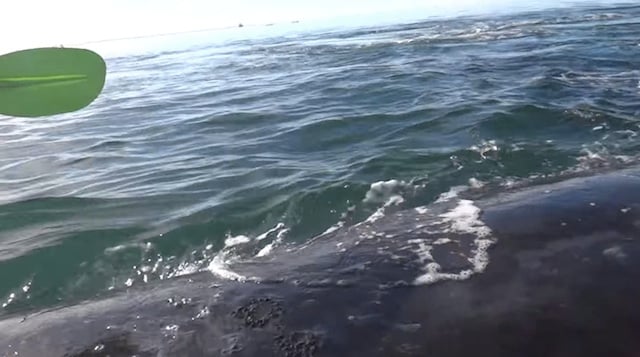 Reports claim the whales pictured are Southern Right Whales, and while it doesn’t seem like the pair was in any real danger, local environment minister Jose Maria Musmeci told the Mirror Online that it is “illegal to approach marine mammals either in a vessel or by swimming or diving and if we can catch anybody they will be prosecuted.”

We’re all for capturing amazing photographs and video, and we’ve seen photographers get in some dicey situations while capturing them, but know the laws and respect them. Wildlife photography and videography can be a wonderful thing, but this incredible footage, at least for this writer, is tainted by the fact that it was captured irresponsibly.

Let us know what you think in the comments down below, and if you’d like to see similarly incredible footage captured by someone who knows and was obeying the laws, check out this video we shared back in March.