Photographer and animal lover Dale Frink was on a whale watching trip earlier this month when something scary happened: two lunge feeding blue whales popped up right behind the whale watching boat he was on, capsizing it and sending Frink and all his stuff into the frigid water.

And yet, he still got the shot.

The whole incident was captured on a GoPro Frink had strapped to the boat. Pointing towards the front, the video didn’t record the whales, but it does perfectly capture Frink’s reaction. “Oh my God,” was immediately followed by a quick turn and click of the shutter before he was tossed overboard and, thankfully, rescued by another nearby whale watching boat. The entire ordeal is described in detail on Frink’s website, and it’s there that he endeavors to set the record straight regarding a few concerns viewers may have:

Suddenly we did not know where the whale was, it could have been anywhere. Per proper whale watching etiquette the Captain stopped the boat to wait for the whale to come up before moving away from the animal.

I cannot stress enough that the Captain was doing her best NOT to get too close to these animals, and that she did her best to follow proper procedure. It was a freak accident that is very rare for whale watching boats.

He goes on to assure readers that neither of the two whales that hit the boat were harmed, as they continued feeding for hours afterwards, seemingly unperturbed by the situation. 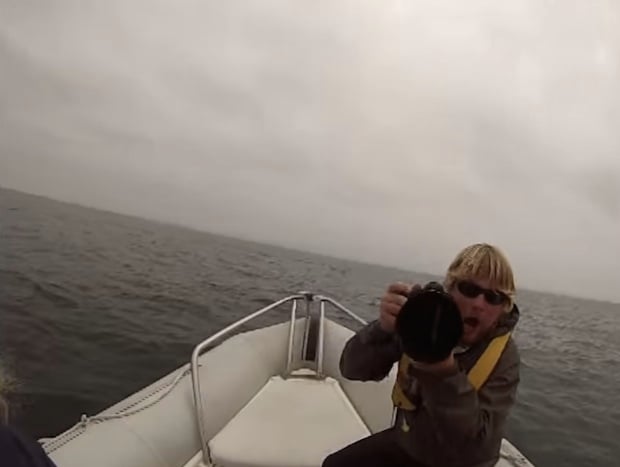 Of course, once your concern for the whales is cleared up, the question that remains is: did he get the shot? And the answer is yes. Published on his website here, he captured an image of the wide open maw of the first whale as it came up out of the water — “the final shot from my first Canon 6D,” as he describes it.

He also says he was able to capture a photo ID shot of one of the whales he believes hit the boat, so he’s hopeful he’ll be able to identify it the next time he goes out. “I’ll just look for the one with a slightly used Galaxy S4,” he quips.