July 4, 2011 is a day architectural and commercial portrait photographer Kevin Young will never forget. While taking a short break from a plethora of assignments he was working on, he was involved in a swimming accident that broke his C4-C6 vertebre, paralyzing him from the neck down.

In the above video, Young details his recovery, how he used photography as a motivation, and how the entire situation left him with a desires to help others, including the woman who saved his life.

The accident wasn’t so much an accident as it was a freak occurrence. While on a man-made island in the middle of San Francisco’s Mission Bay, Young took a simple waist-level dive into the water. Now, normally when there are broken bones, it’s due to hitting the bottom or hitting something in the water. But such wasn’t the case with Young. For unknown reasons, the impact of the water alone seems to be what caused the damage to three vertabre in his neck.

Unable to move, Young was struggling for breath under the water and eventually found himself drowning. A number of friends rushed over to his aid, dragging him out of the water and attempting to start CPR. But it wasn’t until a nurse who happened to be on the beach took noticed and begun properly performing chest compressions that Young was brought back, albeit in critical condition. 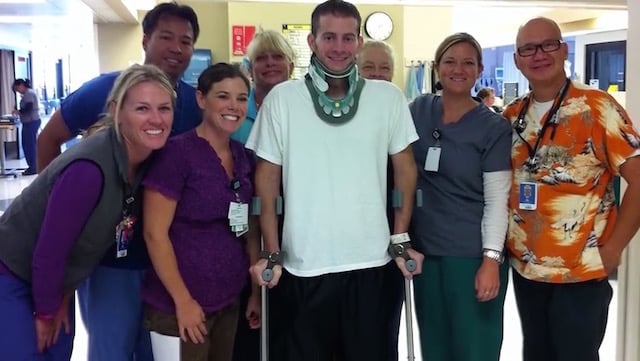 After being transported to the hospital, Young spent 11 days in ICU, unable to communicate with anything more than blinks. Unsure whether or not he’d even survive, Young kept his willpower and pushed on as eventually movement began to come back. First in his right arm, then his legs, eventually all the way down to his toes.

From ICU, he was transferred into a rehab home where he had to learn even the most mundane of tasks, such as swallowing food and getting dressed. But, after a stressful month and a half of daily physical therapy and the mental mindset of recovering, Young did exactly what he wanted to do. He walked out of rehab on his own.

Hoping to get right back into his previous lifestyle, he soon realized this wasn’t going to be easy, with even the most usual of tasks, such as waking up, eating, showering and getting dressed for the day taking five times longer than it had in the past.

Throughout all this he continued physical therapy. Exhausted, but determined, Youing took the evenings when he couldn’t sleep and used his love for photography to help him recover, both mentally and physically.

He would head down to the beach, camera gear in tow, and capture long exposure photographs. It was through these two to eight minute exposures that Young both physically and mentally slowed himself down, eventually bringing back the composure and flow into his daily routine.

And in the most poetic of stories, after searching fervently for the nurse who had saved his life, he found her. It wasn’t long after reconnecting that Young had the opportunity to photograph her wedding. Young says it isn’t at all comparable to what she did for him, but it’s just one way he wanted to say ‘thank you’ for the events that transpired.