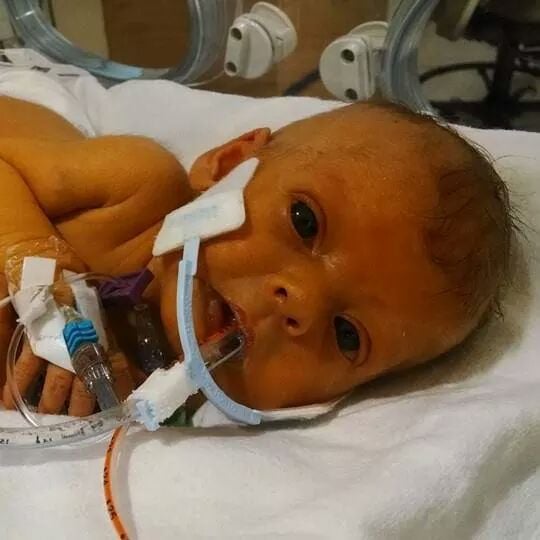 It’s true that the Internet can be a stupid and cruel place — read any comment section on a controversial news piece for proof of that — but it can also be a wonderful place that occasionally brings you to tears… in a good way.

This is a story about the best of the Internet: about a grieving father, a heartfelt request, and an overwhelming response.

This last weekend, Ohio father Nathen Steffel posted a heartbreaking request on Reddit. His daughter Sophia died last week after spending only 6 weeks on this Earth, and since she had spent her entire short life in the hospital, the Steffels had no photographs of Sophia where she wasn’t covered in tubes.

The request was a simple one: “Can someone remove the tubes from this photo.” The response overwhelmed him. Here are just a few of the pictures Redditors created for Nathen and his wife:

The responses came fast, so fast Steffel couldnt’ keep up with them. “I just wanted to reach out to get at least one quality picture,” he tells BuzzFeed. “I was amazed how many people responded. We have so many nice pictures now.”

The pictures are often accompanied by heartfelt well-wishes and messages from others who had been through similar experiences in their life. Between the comments and the Photoshopped versions of little baby Sophia, this ought to restore your faith in humanity in a big way this Wednesday.

To see all of the responses for yourself, head over to Imgur by clicking here and read through the most upvoted comments.

Inspiration, Post-Processing
amazing, heartbreaking, heartwarming, reddit, sophia, touching
Related Articles
Discussion
Trending Articles
Wedding Photographer Tells Couple to Act Drunk, Gets Amazing Portraits
May 20, 2022
Blood Moon, Aurora, and Milky Way Captured in One Photo
May 19, 2022
The Science Behind Why Watches are Set to 10:10 in Advertising Photos
May 17, 2022
Milky Way Explodes Into View During Lunar Eclipse
May 18, 2022
7 Tips for Photographing Dreamlike Landscapes
May 19, 2022