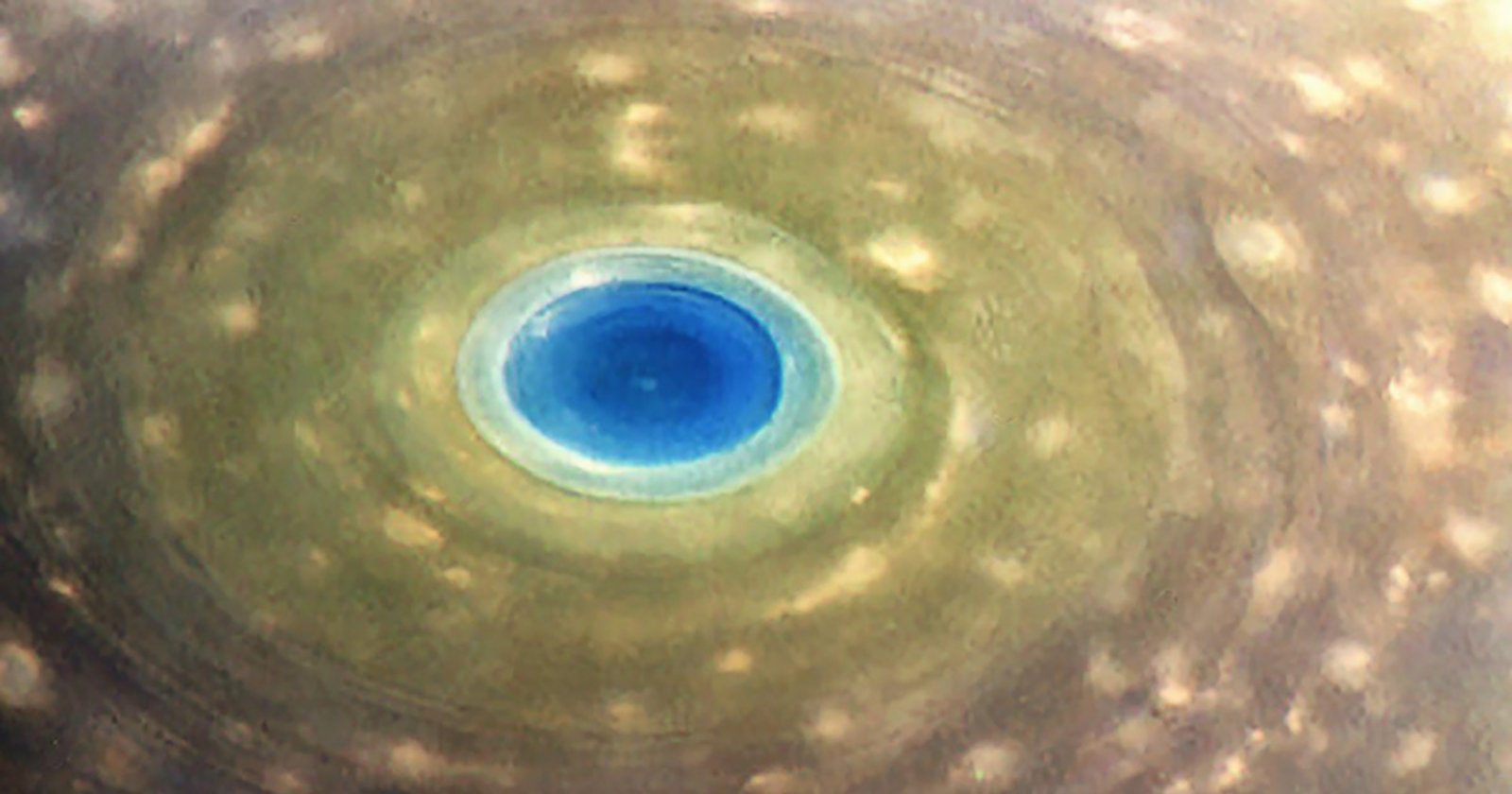 On April 26th, NASA’s Cassini spacecraft took its long-awaited first dive in between Saturn’s rings, bringing it closer to the planet than ever before. And if you were on the spacecraft looking at Saturn’s north pole with your own eyes as it flew by, this is what you would have seen.

This spectacular image was created by astroparticle physicist Sophia Nasr, and it’s one of the first true color images EVER of Saturn’s North Pole and the persistent hurricane churning away at 300+ miles per hour up there. Previous false-color photos typically showed a reddish hurricane, making the true-color blue version that much more beautiful.

EVERYONE: I processed an image PROPERLY!! #Saturn's beautiful blue vortex, taken Apr. 26 by #Cassini during flyby, processed by me! PROUD! 😀 pic.twitter.com/u1Dt2DO9A6

A little additional tweaking, and you get here:

Had to give #Saturn's polar vortex another go (was told about a luminance layer). And wow, what a difference! Taken by #Cassini Apr 26 2017. pic.twitter.com/xwXzNjOWID

Her tweet almost immediately inspired others to try out the same technique, producing similar images that show what the hurricane’s deep blue eye actually look like to the human eye:

Inspired by @Pharaoness who pointed me to this data. But she did it first (and better, IMO). pic.twitter.com/LsofIB0dhM

According to Discover Magazine, the striking blue color, “comes from scattering of sunlight, the same phenomenon that produces a blue sky here on Earth.” In other words, this is not false color or an artist rendition—if you could somehow survive the 77,000 mph flyby, this is what you would have seen.

To give the conversion a shot for yourself, or if you just want to see the RAW black and white images used to create the true-color version, head over to the JPL website where NASA has uploaded all of the flyby photos for you to download and play with to your hearts’ content.

CORRECTION: After speaking with Sophia, she pointed out that Jason Major (@JPMajor) was not inspired by her. He was, in fact, her inspiration and his March 30th image posted here may, in fact, be the first true color image of Saturn’s North pole. Jason, an experienced graphic designer, also helped Sophia perfect her image after the first attempt.

Due credit also belongs to Emily Lakdawalla, whose photo editing tutorial gave Sophia an idea of how to start.

How to Sharpen in Photoshop: An In-Depth Tutorial