Some contend that there are no fireworks shows that can best mother nature’s display during an intense thunderstorm, and the video above by Chicago-based videographer Craig Shimala goes a long way in confirming their belief.

This particular video, a “highlight reel of all the lightning [Shimala] was able to capture during the evening of June 30th 2014 in Chicago,” features a not-quite-unique trifecta of lightning strikes in the windy city.

The electrifying shot was captured while filming a time-lapse of an incoming storm from his home. Using a Canon 7D with 8mm fisheye lens, 50mm lens, 17-40mm and a GoPro Hero2, Shimala managed to capture a triple lightning strike on three of Chicago’s tallest buildings: Willis Tower, Trump Tower and the John Hancock Building. 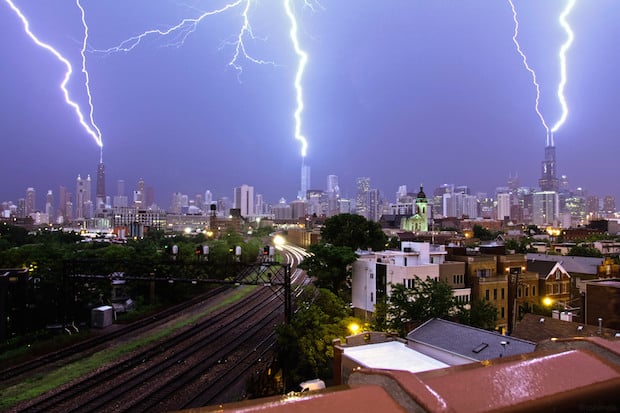 A rather impressive feat — both on behalf of mother nature for presenting the opportunity and Shimala for capturing it — the most surprising thing is that this isn’t the first time he’s captured a triple strike on these three buildings. You can see the other instance in this video from 4 years ago.

The ‘highlight reel’ comes in at a minute and a half, but the unicorn-zeus hybrid of an event takes place just past the :35 mark if you want to skip straight to it. Check it out for yourself at the top and then head over to Shimala’s website to see more of his work.