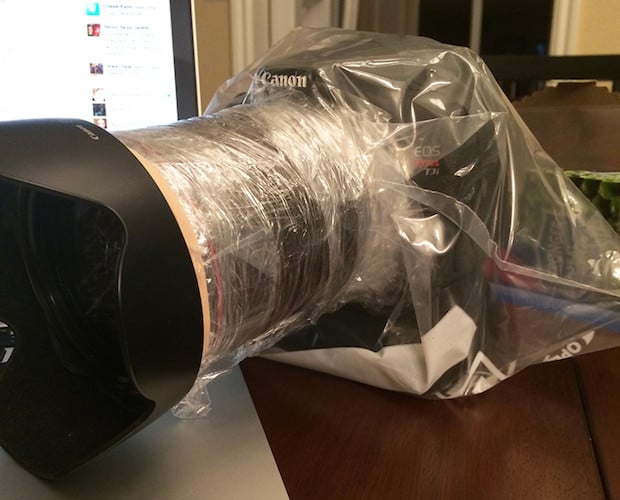 There are a ton of posts that’ll have you scared to take a DSLR to a color festival or run. I want to share my own color-proof seal for the Holi Festival of Colors in Utah that managed to keep my DSLR completely clean for under $15.

I wanted to protect the entire camera from all color particles and leave only the cheap lens filter and lens hood exposed to color. I experimented for hours to find the best way to seal my gear, and this is what I came up with.

Take the lens hood off and tighten the lens filter onto the lens. The filter adds a few millimeters to the height of the lens, and you’ll want to take a piece of plastic wrap (the length about 1.5x the circumference of the lens, the width being about the size of the lens) and wrap it very tightly in a clockwise fashion right around the frame of the lens filter.

Grab one of the gallon sized “Freezer” Ziplock bags and cut a square from one side of the bag. Take this square of Ziplock material and wrap it tightly around the rubber band. 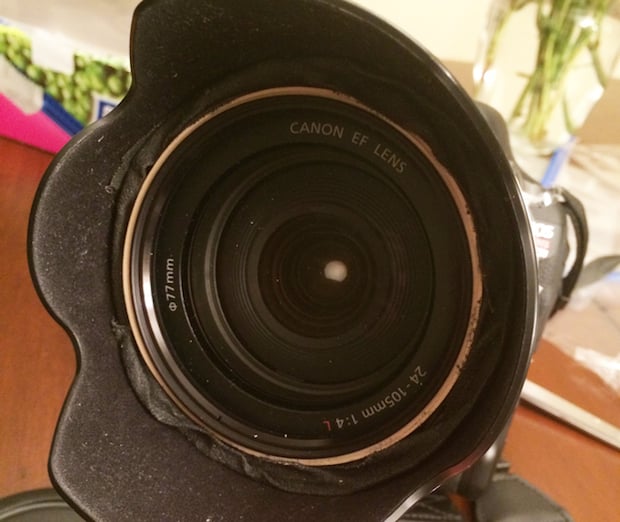 Now it’s time to carefully screw the lens hood into place over the plastic wrap and Ziplock. The Ziplock “Freezer” bags are tough and shouldn’t tear, but if it does begin to stretch and tear it may be a good idea to give the lens filter 90° of clockwise motion before its maximum tightness, complete the steps above, then screw the lens hood on while simultaneously tightening the lens filter.

Since I wanted to be extra careful, at this point I snapped an extra rubber band over the existing rubber band (now located inside the lens hood), and I stuffed strips of gaffer’s tape to fill the space between the lens filter and lens hood.

At this point, any color particles thrown at the front of the camera will hit the lens filter but have no way to get behind the lens filter or anywhere near its grooves.

I chose to set AutoFocus on and leave my lens at 24mm for the entire event, so I tightly wrapped the lens barrel with the initial plastic wrap (the one gripping the lens filter) as a base layer, a few layers of plastic wrap over that, and the Ziplock (being held down by the lens hood) as the final layer. 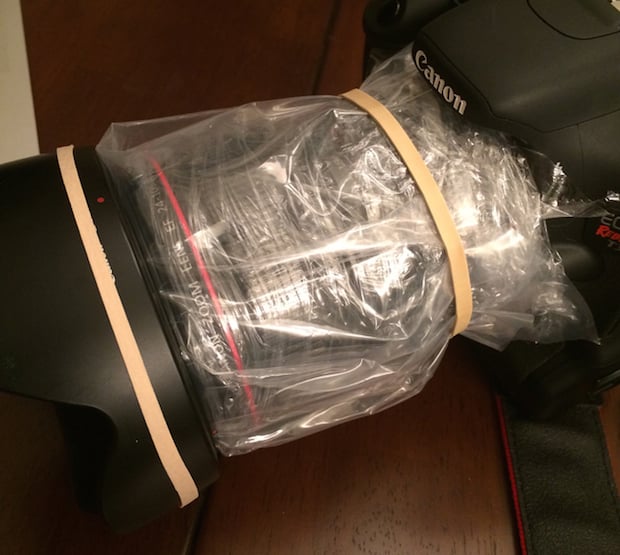 Now that the lens is protected, it’s time to work on the DSLR body.

Grab another gallon-sized Ziplock bag and cut the entire bottom away. You’ll end up with a large ziplock with absolutely no bottom, and you can fit the entire DSLR body and camera grip into that.

When the bottom of the Ziplock is closed, the bag should reach near the front of the lens barrel. This is the point where I pulled out the gaffer tape and tightened the Ziplock over all of my previous plastic wrapping. This creates a particle-proof seal for the entire camera, and to be extra safe you can see that I did more wrapping on top.

You can double-bag the DSLR body if you feel that the Ziplock seal may be a point of weakness. I never opened the Ziplock seal once at the event (the grip and large memory card provide enough battery and capacity for a day of shooting). In retrospect, I’d also put some gaffer tape over the On/Off switch since I could feel it pushing into the Ziplock while I photographed the event.

My color-proof sealing worked flawlessly at the Festival of Colors. I stood at the center of the crowd and got color thrown right at the lens… 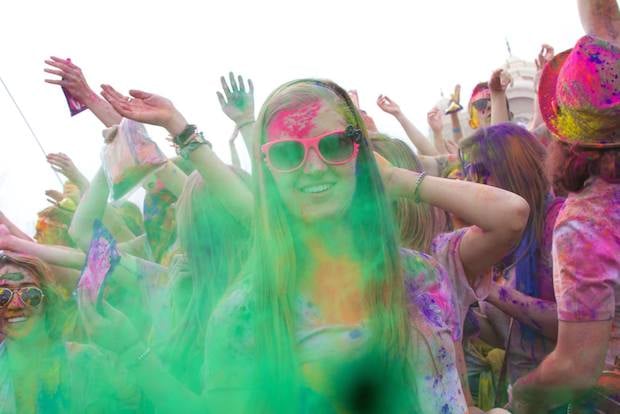 (you can simply blow on the lens and the color will fly away, no need to carry microfiber cloths) yet not one spec of color reached the lens or DSLR body.

About the author: Angel Demirev is a photography hobbyist fueled by coffee and chocolate. His article on protecting a DSLR at a festival of colors originally appeared on his blog.