Haters can hate on the click bait words all they want, because the video above is all-but-literally mind-blowing, jaw-dropping and all the rest. Captured over the course of 4 years by the Hubble Space Telescope, it’s a time-lapse that shows a very unusual star’s ‘light echo’ rippling out through space in the most spectacular fashion.

What you’re looking at is the star V838 Monocerotis, or V838 Mon. A once-shy and inconspicuous star, in 2002 it decided to let its light shine… in a big way. And by that we mean it experienced an “outburst” that resulted in the star getting 600,000-times brighter all at once.

Initially thought to be a supernova, this kind of light eruption was unlike anything astronomers had seen before. It got so bright, in fact, that it was for a time one of the most luminous stars in the entire Milky Way. But what you’re seeing here isn’t that brightening and subsequent dimming, which only took a couple of months. What we see here is what’s called a “light echo.” 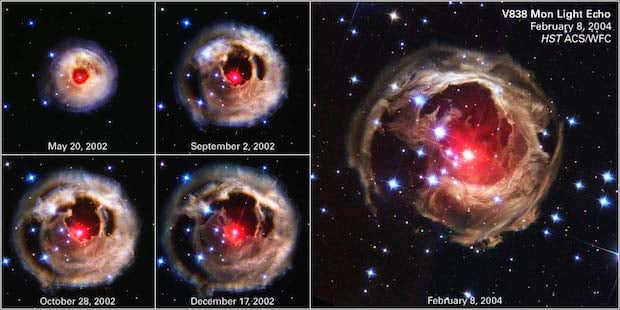 A light echo happens with any object in space that brightens very quickly, such as a nova or a supernova. The light from the star itself reaches us first, but if there is dust and other stellar debris around the star, some light is reflected from the clouds and takes a bit longer to reach us.

As explained on Wikipedia (and well-sourced, I might add) “the reflected light arrives later, producing a vision of expanding rings of light around the erupted object.”

The light echo caused by V838 Mon was, in a word, unprecedented. What’s more, because the star got so bright so quickly, and the event was so unusual in nature, all telescopes were trained on it.

The result is footage like the time-lapse you see above, that shows this awe-inspiring light echo rippling out through the stellar debris surrounding the star, some 20,000 light years away from our pale blue dot.

Wedding Photos Use Wildfire as a Unique Backdrop and Go Viral