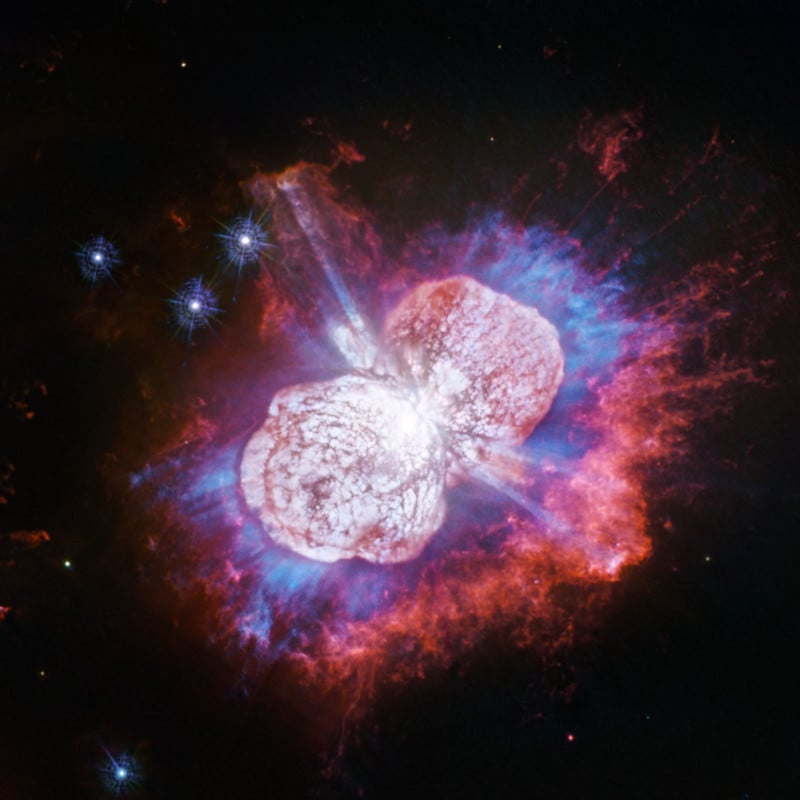 As photographers in the US are gearing up to capture photos of 4th of July fireworks, NASA has released a gorgeous “fireworks” photo of its own. It’s a shot of a “the galaxy’s biggest ongoing stellar fireworks show” that started 170 years ago.

Eta Carinae is a doomed super-massive star 7,500 light-years away that went through a “Great Eruption” in the 1840s that made it the second-brightest visible star in the sky for over a decade — it was so bright that sailors at the time used it as an important navigational star in the southern seas.

Although the explosion has faded in the many decades since, to the point where the star is now barely visible to the naked eye, NASA has continued to photograph and study the explosion over the past 25 years using its Hubble space telescope.

The latest Hubble photo of Eta Carinae (shown above) includes ultraviolet light, and the explosion’s expanding gases are pictured glowing in red, white, and blue.

“The celestial outburst takes the shape of a pair of ballooning lobes of dust and gas and other filaments that were blown out from the petulant star,” NASA writes. “The star may have initially weighed more than 150 Suns. For decades, astronomers have speculated about whether it is on the brink of total destruction.

“The stellar behemoth will eventually reach its fireworks show finale when it explodes as a supernova. This may have already happened, although the geyser of light from such a brilliant blast hasn’t yet reached Earth.”