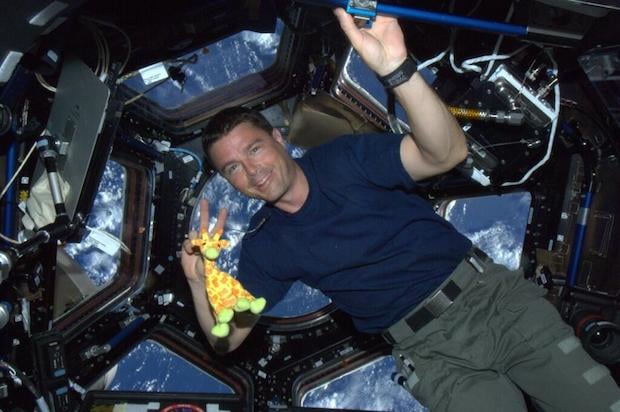 Astronaut Reid Wiseman took one small upload for man and one giant leap for Vine’s marketing department yesterday when he uploaded the first ever Vine from space. But the Vine is just a small, headline worthy piece of what Wiseman has been uploading from space.

The Maryland native arrived at the International Space Station on May 28th, and since this is his first trip to space, he’s been making the most of it… sort of like a kid in a $150 billion candy store that’s floating around in low-Earth orbit.

Fantastic photo after fantastic photo has made its way to the masses through Wiseman’s Twitter feed, in addition to, of course, the record-setting Vine time-lapse you see below.

But the Vine really doesn’t do justice to the visual treasure Wiseman has been sending down to us Earth-bound folk. The beautiful cloud formations, sparkling rivers and snow-capped volcano pictures he’s uploaded are a bit more to our liking.

Here are some of his most recent uploads, capped off by a ‘Soyuz Selfie’:

Have a great weekend. Trinidad and Tobago in the evening sun. pic.twitter.com/zfa89kkJ7C

Reality is better than sci-fi. @astro_alex floats in the distance. pic.twitter.com/Y7p4iZTwb7

1500. Photographer. Sun highlights a storm from underneath. pic.twitter.com/UhH8NahXWa

If you’d like to keep up with the first-time ISS occupant, be sure to give him a follow on Twitter. The flight engineer and former Navy aviator will be floating around at 230 miles straight up until November.