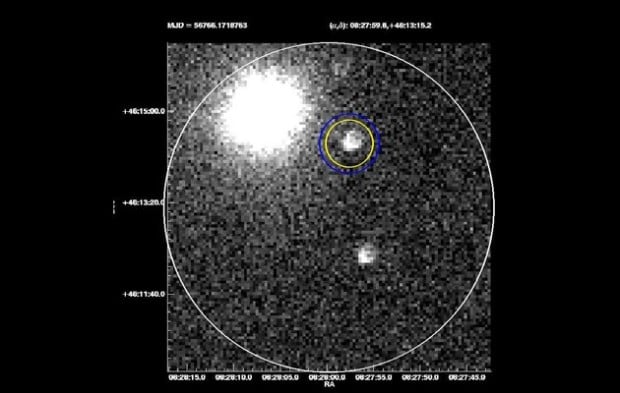 All photographs show a moment that is already gone, but the image you see above is unlike any other, because, while recently captured, it shows a cosmic explosion that took place approximately 12.1 billion years ago.

Highlighted within the blue and yellow circle, on April 19th, Southern Methodist University telescopes captured a photo of a gamma-ray burst — light from a rare, high-energy explosion — that is believed to have been emitted not long after what is commonly referred to as the Big Bang.

The team from SMU used what is presumably a very high-end telescope setup to capture the low-resolution image. But as small in megapixels as the photo may be, it captures data that many scientists will be anxiously awaiting to pour over in order to better understand the structure of the early universe.

It may seem like a small feat to many, but it is indeed an impressive capture considering these photons of light travelled 7.5e+19 miles to hit the sensor of the camera. A number so large that it’s nearly impossible to truly wrap your mind around it.