Red Jumpsuit Apparatus has responded to the copyright controversy we told you about earlier today… sort of. We didn’t receive a response directly from them, but because of the massive amount of attention the story has gotten both here and on Reddit, the band posted an interesting response to their Facebook.

In case you haven’t read the original article, the controversy revolves around a photo by Australian photographer Rohan Anderson that the band posted to Facebook without permission. The issue wasn’t so much the use, however, as the way they handled the situation when he asked that the photo be taken down or they pay for it. 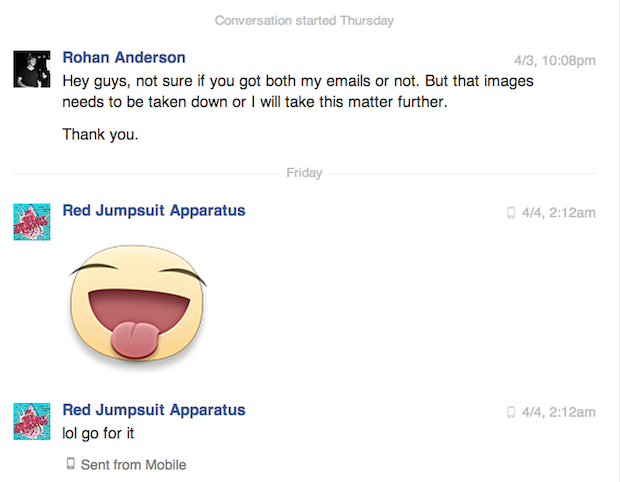 The situation eventually figured itself out (after enough bad press) but in defense of their move the band is claiming through Facebook that they believe ALL forms of digital art should be free and they will therefore be giving away their whole discography for free on July 4th:

We’re not sure how the artistic community will respond to this — photographers can’t make money on tour and the date of the sale makes one wonder if this wasn’t a pre-planned event that would have happened whether or not the entire battle with Anderson had taken place — but it’s an interesting move to say the least.

What do you think of this development? Let us know in the comments down below and we’ll be sure to keep you updated as more information rolls in.

Update: The band has updated its Facebook post to read “most forms of digital art” rather than “all forms”: 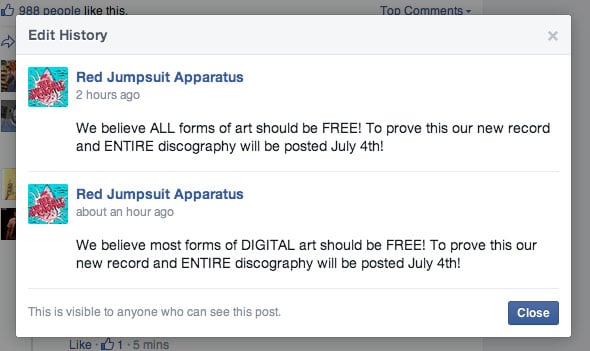