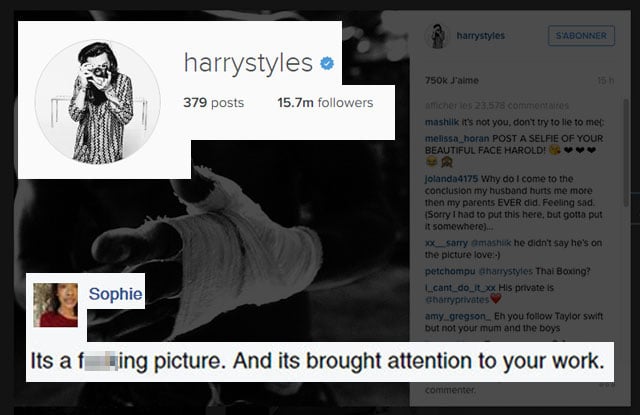 Brussels-based photographer Ezequiel Scagnetti stirred up a hornets nest this past weekend after calling out a world famous boy boy singer for posting a photo on Instagram without any permission or credit. Fans of the star began harassing Scagnetti, defending the singer with abusive messages.

The whole thing started on Saturday when Scagnetti discovered his photo of a Burmese traditional boxer posted to Instagram by singer Harry Styles of the English-Irish pop boy band One Direction. Styles has nearly 16 million followers. 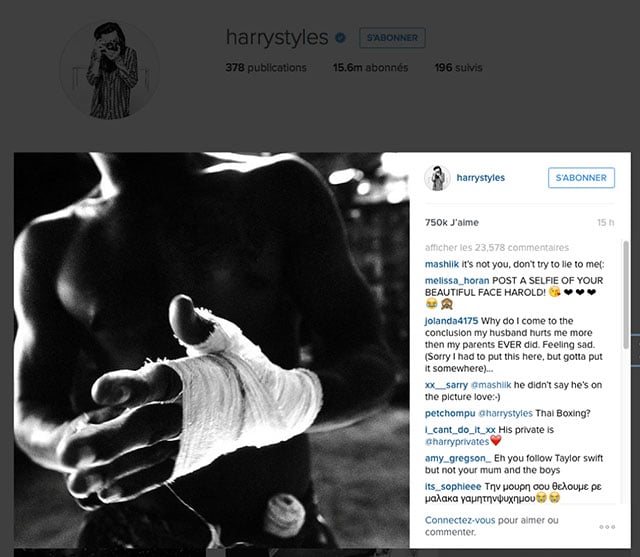 The photo had racked up over 750,000 likes in its first 15 hours, without even a mention of Scagnetti’s name, much less permission from the photographer. Scagnetti took to Facebook to voice his complaint about the post, which has since been taken offline:

Scagnetti’s post was soon flooded by fans of Styles and One Direction. Many commenters were indignant that Scagnetti wasn’t honored to have his photo posted by Styles. Here’s a sampling of the abusive comments:

After days of hateful comments flooding in and people leaving horrible reviews for Scagnetti’s photography business, Scagnetti posted a lengthy response yesterday defending his decision to protect his photo’s copyright. Here’s an excerpt:

Guys, as far I understand most of you are teenagers, this is the only reason I take the time to write you, despite all your extremely aggressive, xenophobic, homophobic and racist insults. Just because you are kids and you have the life in front of you, I write this unique note; it can be helpful at least for a few of you.

We live in a world where 70% of the wealth of the planet is concentrated in just less than 0,5% of the earth population. Statistics prove that most of you are likely to be part of the 99.5% that are out of that wealth. So, you should be happy and spread your happiness and love just because the fact that you have, outside the necessary calories to live, a telephone and Internet connection, when hundreds of thousands of boys and girls are starving at this right moment.

But not, you are spreading hate, unlimited hate, in the honour of #harrystyles.

Do you know that #harrystyles and myself, we live of copyright? Every streamed song, every CD you buy, every concert ticket you pay, you are paying artist’s copyrights. If you are not paying for it, some sponsor or company is doing it for you. Nothing is free. Neither Harry Styles work’s, neither my work.

Every magazine you buy, every poster you see, every advertising photography you see, in internet or in the “real world”, a photographer is getting paid on copyrights, even if you are not taking the money from your pockets, somebody is doing it.

#harrystyles maladroitness is not a real reason for me to sue him (you guys invented it), he is not the first publishing my work without permission and without previous agreement. But you should understand that I have the right to do it if I want. And I have the right to be upset.

I am a rich man, but of another kind of richness, by doing professional pictures, I earn enough to feed my wife and my 2 kids, and that’s all I need.

You see guys, we have different values; success for you is to be famous, to have “likes” in Facebook or to be a pop singer, success for me is raising my family with dignity. So, I do not need to sue #harrystyles or #onedirection even if the harm you are doing to my professional image on my Facebook page by rating it at the lowest it could only finish in more harm to #harrystyles , as all this happen because his illegal use of my image.

(via Ezequiel Scagnetti via Bokeh)