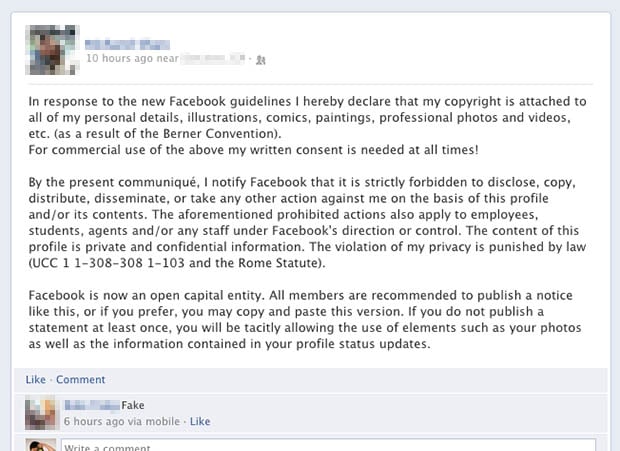 One of the big stories in the tech world at the moment is Facebook’s effort to do away with its public voting system for approving changes to the service’s policies (yup, Facebook is a democracy). Pranksters are taking advantage of the controversy to stir up some FUD among Facebook users. One of the things that has been circulating over the past few days is a bogus “chain letter” that people are posting as status updates, believing that their photograph copyrights are at risk. The message is spreading like wildfire — many of you have likely seen it already — but there’s one big problem: it’s all a complete hoax.

Here’s a common version of the message that’s being passed around:

In response to the new Facebook guidelines I hereby declare that my copyright is attached to all of my personal details, illustrations, comics, paintings, professional photos and videos, etc. (as a result of the Berner Convention).

For commercial use of the above my written consent is needed at all times!

By the present communiqué, I notify Facebook that it is strictly forbidden to disclose, copy, distribute, disseminate, or take any other action against me on the basis of this profile and/or its contents. The aforementioned prohibited actions also apply to employees, students, agents and/or any staff under Facebook’s direction or control. The content of this profile is private and confidential information. The violation of my privacy is punished by law (UCC 1 1-308-308 1-103 and the Rome Statute).

Facebook is now an open capital entity. All members are recommended to publish a notice like this, or if you prefer, you may copy and paste this version. If you do not publish a statement at least once, you will be tacitly allowing the use of elements such as your photos as well as the information contained in your profile status updates.

There’s actually no such thing as a “Berner Convention.” It seems to be a misspelling of the Berne Convention, an international agreement between 165 countries regarding the issue of how copyright is handle between them. It doesn’t grant you any extra copyright protections in addition to what your country’s government already grants.

Furthermore, all your agreements regarding content copyright were already handled when you signed up for the social networking service. No status update you post will add to or detract from what you agreed at the time.

Snopes has published a long piece debunking the hoax (which also did the rounds earlier this year) and writes,

Facebook users cannot retroactively negate any of the privacy or copyright terms they agreed to when they signed up for their Facebook accounts nor can they unilaterally alter or contradict any new privacy or copyright terms instituted by Facebook simply by posting a contrary legal notice on their Facebook walls. Moreover, the fact that Facebook is now a publicly traded company (i.e., a company that has issued stocks which are traded on the open market) or a “capital entity” has nothing to do with copyright protection or privacy rights.

Any copyright or privacy agreements users of Facebook have entered into with that company prior to its becoming a publicly traded company or changing its policies remain in effect: they are neither diminished nor enhanced by Facebook’s public status.

So if you see this message plastered all over your Facebook news feed, kindly inform your friends that they’ve fallen for a big fat lie.

(via Snopes via Slate)

A Demo of the Upcoming Raspberry Pi 5-Megapixel Camera Board

Using a Floor-to-Ceiling Pegboard as a Portrait Backdrop