When you first play the clip above, you might wonder why this guy is the only one walking normally in a world of backwards walking people and backwards driving cars… and then it hits you: he’s the one walking backwards, and the video is being played in reverse.

The clip is actually from a 9-hour production — yes, a full 9 hours of this — called Tokyo Reverse that was played in its entirety in France as part of some strange new television trend called ‘Slow TV.’ And while we wouldn’t want to watch 9 hours of this, five minutes did keep us pretty much glued to our computer screens. 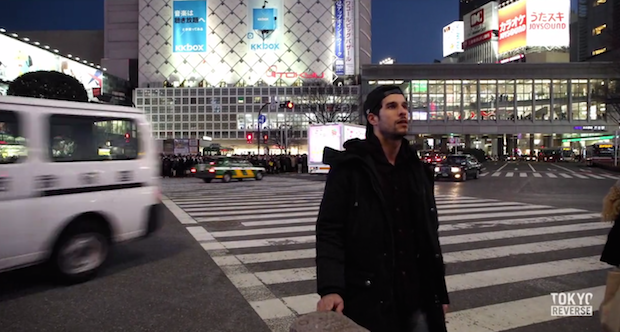 This is a neat effect but it isn’t actually new. It’s usually used as a filmmaker trick to make a person’s walk seem… eerie. What makes the video above stand out is that the man is so practiced at it that he seems to be strutting almost normally through the streets of Tokyo.