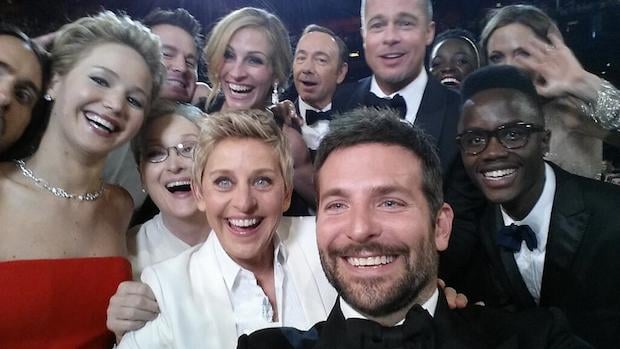 Last night, thanks to a little star-studded tweeting, Ellen DeGeneres managed to break Twitter with a selfie… a selfie that has gone on to break the previous photo retweet record three times over, proving once and for all that all you need for a good photo these days is a smartphone and some of Hollywood’s biggest stars.

Pardon me, did I say good? I meant popular.

However you feel about the photo itself — it came out a tad blurry in places but Kevin Spacey’s perfect timing and placement save it — you have to give Ellen props for this one. Not only did she break the retweet record and immediately convince hundreds of thousands of young people to pick up a Samsung smartphone, she also momentarily broke Twitter.

If only Bradley's arm was longer. Best photo ever. #oscars pic.twitter.com/C9U5NOtGap

Before her Oscar selfie won the crown, the most retweeted photo of all time was a photo of President Obama embracing the first lady after winning a second term in the White House. That photo, a clean image that captures an important political moment, has just shy of 800,000 retweets.

But who needs politics when you have celebrities, right? Well, we’ll let you make that call. Let us know what you think of the most retweeted photo ever in the comments down below, and keep an eye on the embedded tweet above to see the retweets keep coming. With all the media attention it’s been getting, we wouldn’t be surprised if it breaks 3 million by the end of the day.