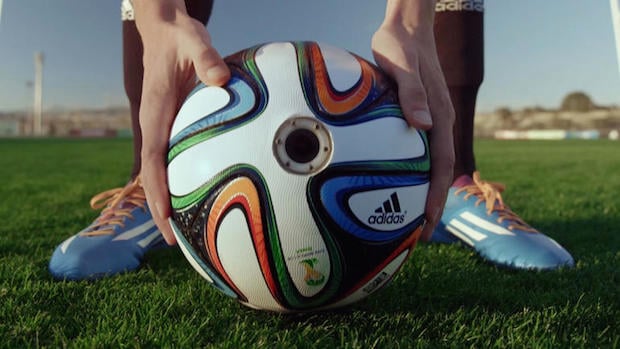 It might not count as ‘regulation,’ and the footage of it actually being kicked around will make you nauseous, but we still think Adidas made the right choice when they turned one of their World Cup ‘Brazuca’ Soccer Balls into the ‘Brazucam‘ with the addition of 6 action cameras.

Truth be told, the camera was created as an advertising stunt to promote Adidas’ new soccer ball that is, according to the company, the most spherical to date. And so, in an attempt to tell people this and psyche them up for the World Cup in Brazil at the same time, they put six GoPro-style action cams in one of the balls and sent it out to travel the world.

In the weeks leading up to the World Cup the ball is traveling to Spain, Germany, England, Russia, Japan, the USA, Mexico and more, recording interviews, tweeting out selfies (no seriously, it’s taking selfies) and (soon) providing 360-degree interactive images.

All of the ball’s adventures will be uploaded to the Adidas Football YouTube channel and you can follow the ball specifically on the Brazuca Journey website or Twitter where the aforementioned selfies and even a photobomb can be found.

From what we’ve found, this ball will not be used in any actual games. That being said, the ability to record 360-degree interactive video could come in VERY handy and offer some amazing new internal views from a match if they can ever manage to design a camera ball that is used professionally. Fingers crossed.