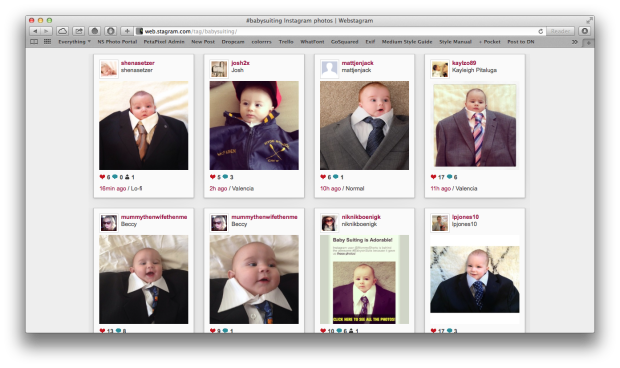 Are you looking for a creative new way to photograph your newborn at home AND you like to be part of the newest social media trends? Well you’re in luck, because a new thing called “Baby Suiting” is sweeping the Instagram nation right now.

Created by mother and blogger Ilana Wiles, Baby Suiting is the practice of putting infants in adult business clothes and snapping their picture. Wiles told the Daily News:

Originally, I wanted to dress them up to look like the characters in Mad Men, but women’s clothing really didn’t work. The suits were much funnier. Something about the big padded shoulders made them all look like that scene in Beetlejuice with the shrunken head.

In the initial stages of the trend, she reached out to her followers in hopes of coming up with a creative hashtag to get the trend rolling. After over 250 ideas were thrown around in the comments, she settled on #babysuiting — a natural follow-up to #babymugging. Stranger, rejected hashtags include: #biznizbabies, #robford and #beetlejuicing.

To take part in the trend, all you need is an infant (preferably one who hasn’t yet to learn to crawl… and is yours), an old suit-jacket or blazer, a dress shirt and a tie. Once you have gathered the above props, dress up the little guy or gal, snap a photo, toss on the #babysuiting hashtag and tag @mommyshorts so Wiles can see your contribution to the trend.

Samsung’s Latest Display Options Include a 4K, Billion-Color Model for $700