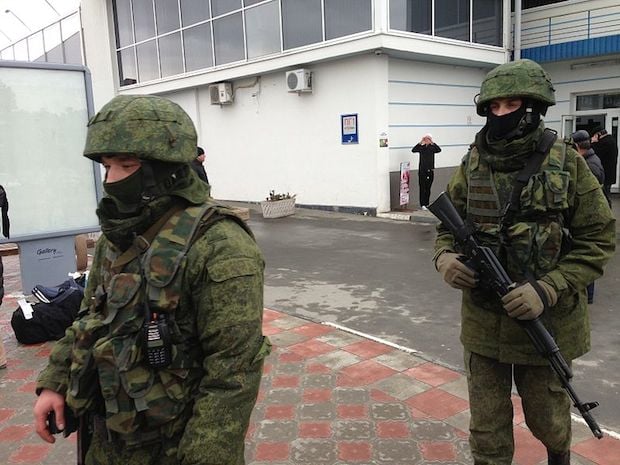 As Jim Morrison once said, “Whoever controls the media, controls the mind.” There is power in an image, and the press often become persona non grata in a conflict that is socially and politically charged. This is what is happening in Crimea right now, as photojournalists Kilian Fichou and Laetitia Peron revealed in a recent article on the AFP Correspondent blog.

Between civilian militants and unmarked but obviously Russian military forces, Fichou and Peron reveal that they have spent much of their time in Crimea and Ukraine staring down the barrel of a rifle and having memory cards and cameras taken away… sometimes by force:

At one such “border” between Crimea and Ukraine, one of these militiamen says: “You can film, but if you so much as step onto Crimean soil I will break your video camera.”

When Kilian ventures over to a grassy corner to find a better viewpoint, the militant accuses him of staining his land. He yanks Kilian and tries to grab the camera, while letting loose a torrent of insults. Scenes like this play out all the Ukrainian military bases.

Threats, insults and physical violence seem commonplace and photojournalistic trickery has to be employed if one is to get any photographs or video footage out to the masses that want to see what is really going on.

All of this and much, much more is discussed at length in a fascinating article on the AFP Correspondent blog that is well worth the time it’ll take you to read it. If you’d like to learn a bit about the working conditions for photojournalists in Crimea right now, don’t skip out on this one.

Humor: Funny TED Talk Spoof for an App that Turns Photos Into Music

Tiny, Lensless Sensor May Someday Turn Any Device Into a Rudimentary Camera