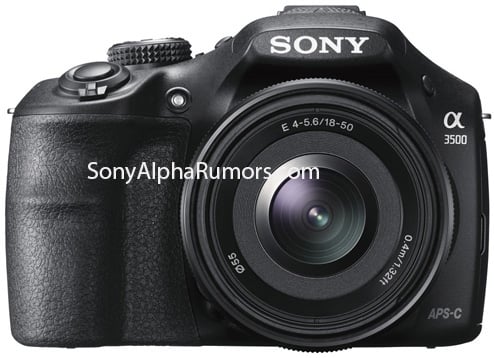 Well that was quick… only seven months after the E-Mount a3000 made its debut, it looks like Sony already has a followup ready to release. And thank to sonyalpharumors we get to look at a few product shots of the camera and what looks to be a full official list of specs.

We won’t cover everything here, for a full list of specs and more pictures you can visit SAR, but the TL;DR is that the differences are extremely minor. A new 18-50mm f/4.0-5.6 Sony lens and better battery life are the only differences we could spot (let us know in the comments if we missed something). Other than that, it looks like the biggest difference between the a3000 and a3500 will be the name badge.

Not that that’s a bad thing. If you’ve had your eye on the a3000 you’ll probably be able to get one cheap just as soon as Sony makes the announcement official.

As always, take the specs and pictures with a grain of salt. SAR seems very confident of the veracity of this information, but you never know with rumors. Keep checking back and we’ll be sure to update you if and when this camera makes its official debut.