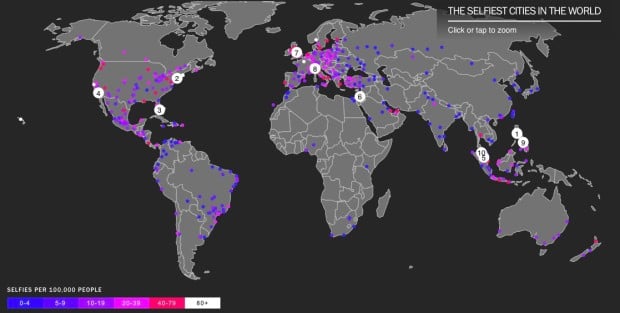 Selfies… for better or worse, they’ve become a staple of the society we live in. But where exactly lies the epicenter of this movement so many of us love to hate (or just maybe hate to love)?

Well, according to a recent study and analysis done by TIME, the “Selfie Capital of the World” is Makati City, Philippines, known also as the financial center of the country. Coming in at 258 selfie-takers per 100,000 people, Makati City completely destroys the competition.

Following a little distance behind Makati City are Manhattan, NY; Miami, Florida and Anaheim and Santa Ana, California, which come in at 202, 155 and 147 selfie-takers per 100,000 people, respectively. But TIME didn’t stop there, the full list ranks everybody from Makati City at number one all the way down to Nice, France at 100.

What was the methodology behind their investigation? They used the Instagram API. Downloading all photos taken from January 28th through February 2nd and March 3rd through the 7th, they built up what had to be a massive database of geotagged Instagram posts hashtagged #selfie.

From there, they narrowed their research down to cities with a population of at least 250,000 residents, counted the number of selfies taken within 5 miles of the cities’ geographical center, and then divided the number by the population of the given city. This is how they ultimately arrived at the “people who take selfies per capita” metric.

TIME does admit that there are some holes in their methodology: not everyone uses location in their photos, not everyone tags their #selfie, the word “selfie” doesn’t translate to many languages, and overall economic and social fluctuations in the cities account for a large influence. And yet, we doubt the list would have changed too much even if all of those factors could have been taken into account.

Overall, the Instagram-aggregated research yields some interesting results. Some cities seem appropriately located while others come as a bit of a surprise. What are your thoughts? Any surprises? Any “Duh” cities? Let us know in the comments.