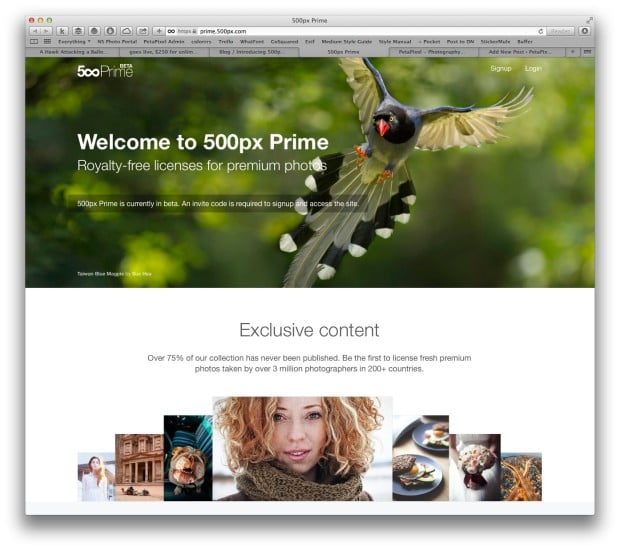 When 500px announced that it was introducing its own photo licensing feature, 500px Prime, the company received a lot of backlash from photographers who thought a 30% cut was far too little.

Well, it looks like 500px was listening. Because Prime went live yesterday with a significantly more favorable payment breakdown.

Rather than the original 30% cut photographers were said to take from the initial announcement, 500px made a solid PR move by switching it around and promising photographers 70% of the $250 per image licensing fee.

The downside is that it seems $250 is as high as the payment scheme goes. In the original announcement, the company stated that licensing prices would start at $250, insinuating there would be higher tiers. But, with 500px Prime now live and plans finally spelled out, it appears that $250 is THE flat fee for royalty free, worldwide, unlimited use across all media… forever.

Many are already arguing that 70% of $250 isn’t enough for perpetual rights to an image, but it is a vast improvement over the 30% cut. At $175 per image, it may or may not be worth it to many, but some will see it as a much better opportunity than many of the other options out there, and I tend to agree with them.

My personal opinion on the situation is that 500px went about this in a responsible way across the board. They came up with a plan to allow users to license their photographs, announced the terms and finances behind it, and after getting justifiably torn into, they changed their plans to better put the content creators first.

A 70%/30% cut seems fair to me, as it’s the exact same cut Apple utilizes for their apps and media, which we all know has faired well for creators. Sure, many will disagree that downloading a DRM free song that you own forever is different than being able to use a photograph however a person or corporation would like, but it’s important to remember that no one is forcing you to use this service over any of the others.

500px righting their wrongs a bit by increasing the cut to photographers sets an important precedent that will put some pressure on other stock photography services to do the same so they don’t lose their client base. It may not be perfect, but competition amongst providers is always welcomed.

Plus, the flat-fee of $250 is going to entice a lot of smaller companies, corporations and even individuals who want a simple pricing structure. Rather than having to spend time figuring out how and for what they’re going to use the image, they’ll go to 500px Prime knowing that with X amount of dollars, they can get X amount of photos. It makes the market much more intuitive on both sides of the equation.

Of course, that’s just my opinion on the matter. What are your thoughts on 500px Prime and its updated conditions? Is $175 enough for complete rights to one of your photos, forever? Let us know in the comments.