Update: The original version of this post quoted a flight attendant in the intro, when it was in fact the author’s girlfriend who made the remark that he was annoying people. This was an editorial mistake on our part, and has been fixed.

“The sound of your shutter clicking is annoying the people around you.” said my girlfriend, sitting next to me. “I know,” I replied “I don’t care at the moment, I’m shooting some crazy unique footage!”

Last week I was lucky enough to shoot the world’s first sunset hyperlapse sequence from an airplane, here’s how I did it.

Let me start off by saying that cinema-productions have been shooting similar looking footage for years, the difference here however is that I shot this footage using the hyperlapse technique that’s been making the rounds on the Internet for the past two years or so.

A hyperlapse is a special photography technique where you take a series of photos with similar framing while physically moving in between every shot. After stabilizing the footage with special software, you (quite literally in this case) create a flight through time and space. Because you’re shooting at a slower framerate than the usual 24/25/30 frames per second, the rendered video will show the world in fast-forward. 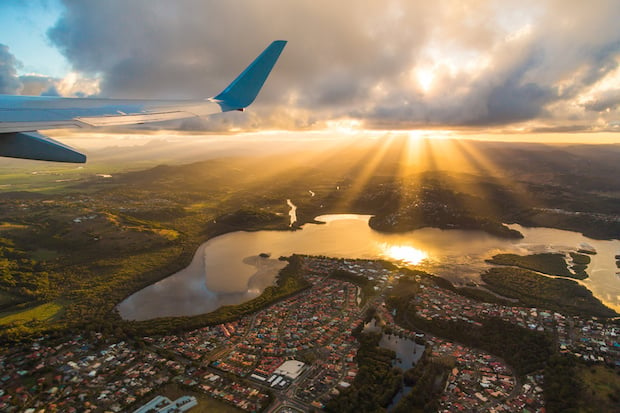 Last week I was about to fly back from Coolangata airport (Gold Coast, Australia) to Sydney when I noticed the sun was about to set with some great cloud coverage. Knowing that I’d have a big chance of shooting some great stills, I loaded up my Canon 5D MkIII with a fresh battery and two empty memory cards, ready to shoot. Lens of choice was the Canon 24-105L, great focal range and incredibly useful built-in stabilization.

During take-off I could see beautiful ‘God rays’ forming (sunlight shooting through the clouds, creating golden rays of light) and got very excited! A few minutes later, I ended up with the photo above. (Have a look at the full gallery of stills here).

But this was only the beginning.

Twenty minutes later, the clouds were looking great from 30,000 feet up in the air, and I decided to try out some hyperlapse sequences by setting my camera to Drive-mode, and shooting continuous stills. What I was able to shoot next was unique, and incredibly exciting to capture.

I had just shot a number of cloud sequences where you can actually see the light changing gradually, as the sun was getting closer and closer towards the edge of the clouds at the horizon, when the plane angled itself towards the setting sun. Lucky me! Right when the climax was about to happen, I was able to compose a frame where the planes wing wasn’t visible, and I had a clear line of sight of the sun going down. 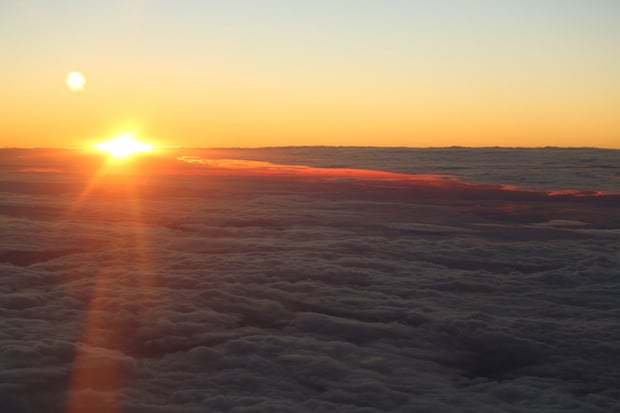 Holding the camera very, very still, controlling my breathing and annoying everyone around me with my fast paced shutter firing off dozens of shots, I knew I was in the process of capturing a world’s first! Without bothering you further with text, enjoy this unique video.

About the author: Matthew Vandeputte is a film editor and timelapse/hyperlapse photographer based out of Sydney, Australia. He is available worldwide for (music) festivals, events, corporate videos or any other project that requires unique imagery. To see more of his work, head over to his website or follow him on Facebook, Google+ or Twitter. This article was originally published here.

A Look at What 2013 Was Like for the Photo Industry (Spoiler: Not Too Good)