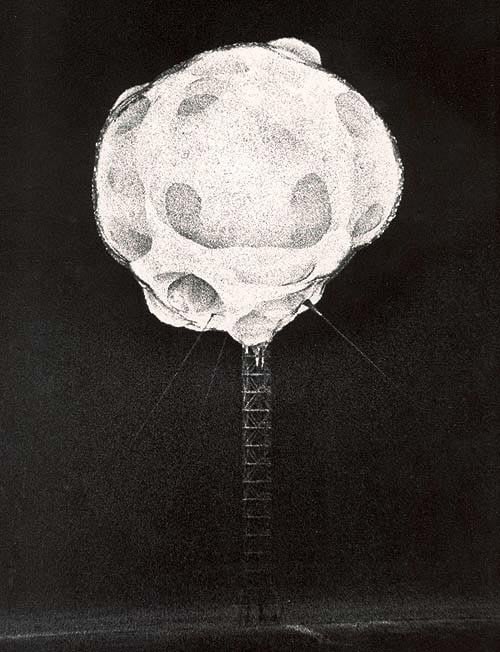 This is a photo of an atomic bomb milliseconds after detonation, shot by Harold ‘Doc’ Edgerton in 1952 through his Rapatronic (Rapid Action Electronic) Camera.

The photo was shot at night through a 10 foot lens, situated 7 miles away from the blast, atop a 75 foot tower. Edgerton systematically turned on and off magnetic fields acting as the camera’s shutter, as opposed to a conventional, mechanical close. 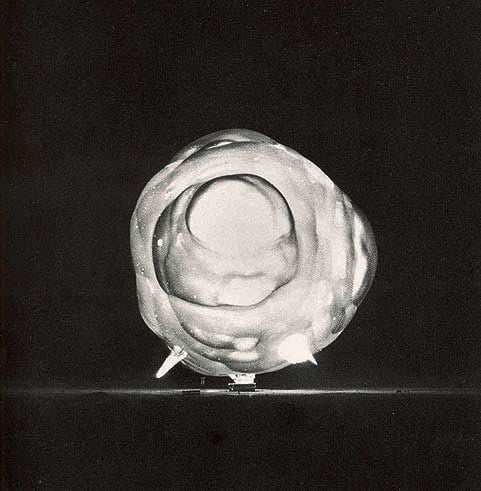 This is 1/100,000,000th of a second after the first photo. See those little horns coming out the bottom? That’s lightning bolting down the tension wires of the now engulfed tower created by the force of karate-chopped atoms.

As a photographer, I’m inspired by odd things. I look at the pictures above in technological awe and giddiness. 7 Miles away? A hundred-millionth of a second? Asymmetrical composition, but how do you go about framing pure, capricious energy? The blast looks like a glorious, shining ectoplasmic orb on a macro level. Perception is completely skewed; is this a Death Star explosion…oh, and I’ve never seen a bomb used as a light source.

As a human, It’s hard for me to fathom that something so horrible and destructive could be so mesmerizingly beautiful. I get lost in the skeletal blob surrounded by empty darkness. It’s eerie, unnerving, but looks inviting, galactic; perhaps a glimmer into Earth’s own beginning. 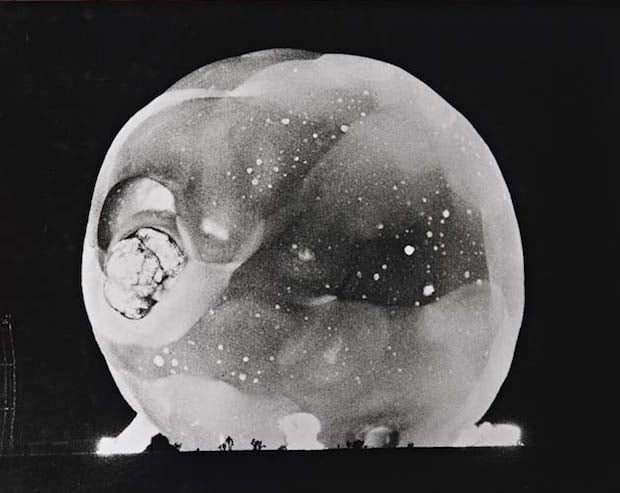 Another 1/100,000,000th of a second later, and you can see the Joshua Trees with the front row seat to Doomstown. After the blast, scientists found that the tower holding the bomb was completely incinerated, gone; the surrounding desert sand melted into glass.

Doc Edgerton looked at (somewhat) common occurrences differently through his perfected technologies of the stroboscope, snapping freeze frame shots of speeding bullets exploding bananas/cards, or an apple. But of all his famous works (which you can view HERE), the ‘Atomic Series’ with the Rapatronic is my favorite. 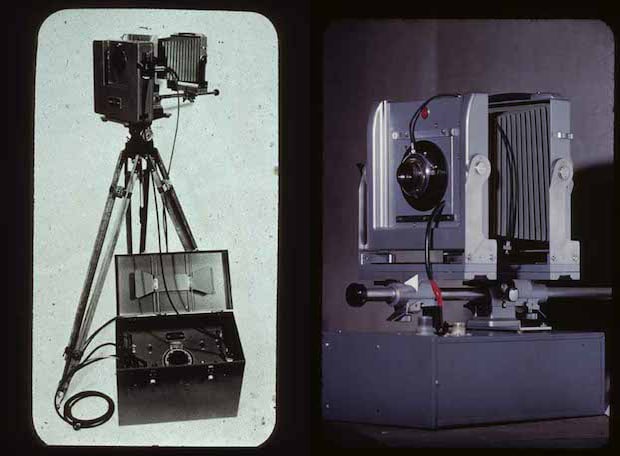 When I see the pics, I kind of zone out. I’m inspired to look at all different angles of everyday life, even the most mundane blips. Maybe I missed something.

I’m also reminded, or perhaps just driven by more topical situations, the pursuit/warning of absolute power – in whatever form – may look beautiful, but is it worth it? Do you want to have your molecular make-up flambéed and obliterated trying to obtain it? Me, I’ll just watch it explode from afar.

About the author: Mike Bukach is a photographer and Senior Writer for a Health Tech company in Columbus, Ohio. You can find more of his work on his ‘Roam About Mike‘ blog or by following him on Facebook or Twitter. This article originally appeared here.