We’ve seen milk used as a prop in photoshoots before, but never quite like how Paris-based photographer Alexander JE Bradley goes about using it. Profiled in the latest The Weekly Flickr installment, Alexander goes around splashing people with milk and capturing silly, moo-ving images in the process.

The Great Spectacle of the Milking series came to life while planning a party for some of his friends. For some reason, he needed an image of someone having milk thrown at them; but no matter how long and hard he searched the Internet, he met with zero success.

“Because I didn’t want to live in this kind of depressing milk-less world, I took the initiative and decided to shoot one myself.” he explains. “My friends and I grabbed some milk, asked a friend if he would be cool if we threw milk on him, he said yes, and the rest is history. It was fun and everyone got a kick out of it.”

Here’s a look at a few select images from the series: 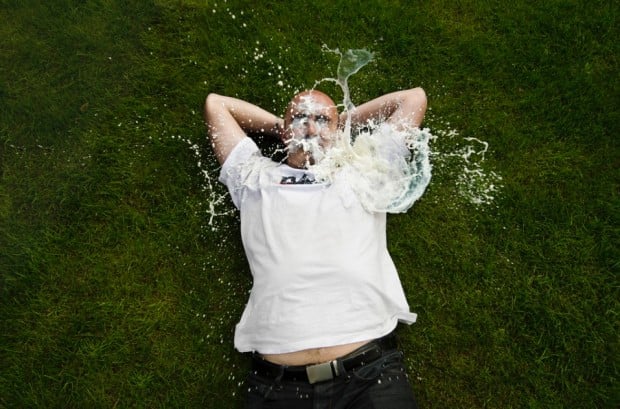 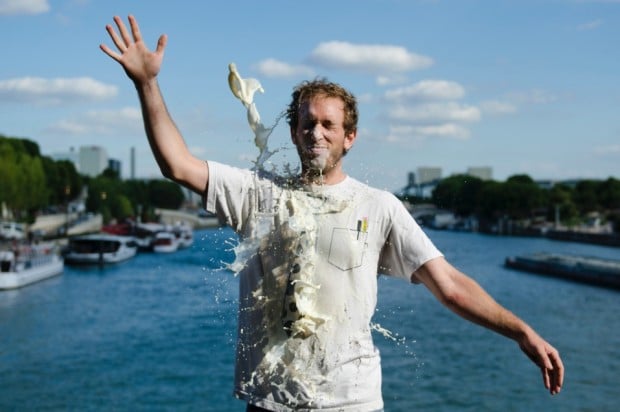 With the gear he needed, gallons of milk at his disposal, friends willing to help, and subjects ready to be “milked” Bradley started adding to the series. Three to ten “milkings” would take place at each shoot, capturing a burst of usually six images while the milk was crashing across their faces.

“It can be quite challenging to choose which exact instance is the best,” Bradley told Flickr. “I think over the course of the series I have got most of the moments: the anticipation and terror before the milk hits, the initial shock upon impact and usually the hilarity that ensues after the fact! I try to just take a close look at the expressions of the individual and see which one looks the most interesting.”

Bradley’s personal favorite is Cookie Man (pictured below), which is one of the first in the series. The photo captures an all-too-calm subject enjoying a cookie while the milk he intends to wash it down is just about to make its presence known. He also notes a funny instance where a group of children witnessed the making of one of his photographs:

They just stopped to see what we were doing. And as soon as we launched our milk they turned excitedly to their parents screaming, ‘Can we do it! Can we do it! Can we! Can we!’ I was really surprised when their parents responded, ‘Now just go and ask the nice photographer man and see if he’ll let you do it.’ Of course I did and that picture was hilarious. Bradley states that the series doesn’t have any deep concept behind it, “If it makes people smile, then that’s good enough for me,” he says in the video. “Most of my work is pretty crazy, this is probably a reflection of myself as a fairly offbeat person. And as an Australian, I think I have a rather rye sense of humor and will find something absolutely hilarious that others might just think is a bit odd. But it’s all fun.”

To see his entire series, head on over to the Le Grand Spectacle du Lait (The Great Spectacle of the Milking) Flickr album. And if you’d like to keep up with the rest of his work, go and give his photostream a follow.

Should Photographers Accept Bitcoin as Payment?