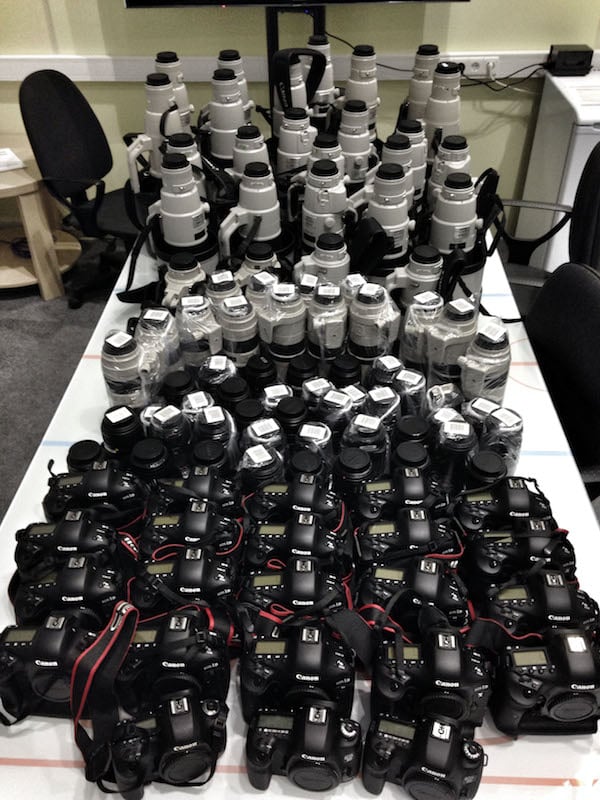 In the picture above, taken on January 30th 2014, you see more than 315,000 Euro worth of Canon camera gear or 425,659.59 US dollars! That’s the value of a house and more than a Lamborghini Aventador!!! Now pick up your jaw, put it back into place, wipe away the drool and read about how the pictured gear wasn’t even around seven years ago.

When IOC President Jacques Rogge announced in July 2007 that Sochi was named as the host city of the 2014 Winter Games, the Getty Images global operations team went into full swing to begin preparations.

Even though the actual event only runs for 16 days, years of planning are required to bring an event together so it runs seamlessly for all those involved.

At this point the venues that will host the games haven’t even been built!

The team has to find out as much information as possible in advance.

Where are the venues? How do we get there? What technologies are available? When will the venues be complete? As I write this all the venues are still receiving finishing touches so that they are ready to go for both the athletes and the general public when competition begins.

By the time Getty Images is ready to start coverage of the games, 20,000km of cabling will be in place to connect all the venues to the editors based at the main press Centre in the Village Cluster, and another in the mountains. About 70 staff will be on site for the entire duration of the games, including photographers, editors and sales staff.

So what’s changed about the gear you see now to how it was seven years ago?

Back then we had the MkIIN cameras with a crop sensor. Now we have the full frame 1Dx’s, with a TON of features — including various AF controls, better white balance and the ability to send remotely either via the WFT device or directly with the VLAN Ethernet system. The cameras also feature full HD video capabilities, which have opened up a whole new world for us.

The prime telephoto lenses are now much lighter and more streamlined thanks to new optical technologies. The new 200-400mm f/4 would have been just a fantasy seven years ago, it is now a reality, and has become my first choice when shooting events. There was no 800mm f/5.6 or 8-15mm zoom fisheye. The flash system can now be controlled by the speedlight transmitter.

Also, the entire range of zoom lenses available then has been redesigned and features all new optics.

At most major global events photographers receive support from the professional services of Canon and Nikon. Having these services helps photographers to do their work better, knowing that if something goes wrong with our equipment we can get it fixed on the spot without having to send it away.

This service also is a great help when trialling new equipment that may be about to be released, or to simply speak to the technicians and ask questions about camera or lens set ups. 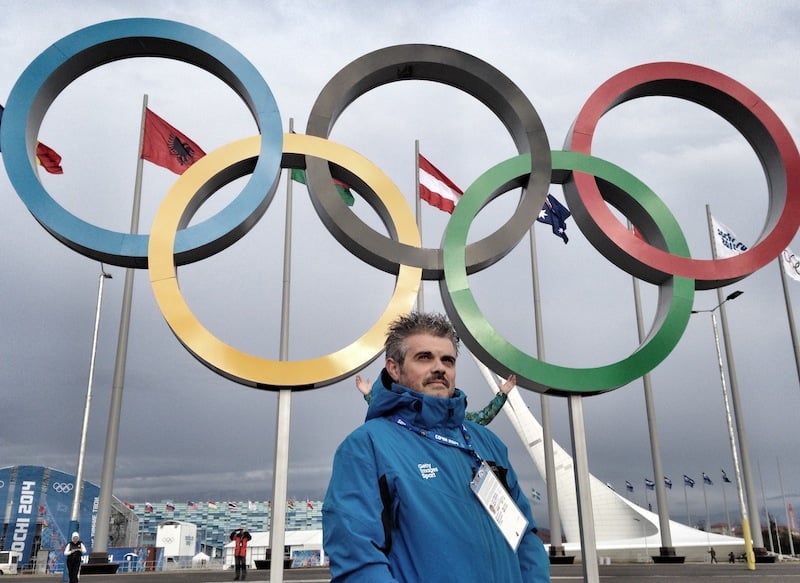 The majority of the pool of gear you see at the top will be used for back up to our own gear if something fails, and for remote camera set ups. Remotes are used to give us an extra angle or angles at particular events or remotes can also be set up in advance in areas where a photographer would not be able to stand otherwise.

At some point or another, most of this gear will be in use for the Winter Olympic coverage.

This year is a big year in global sporting events with the Winter Olympics in Sochi, Russia, the World Cup in Brazil and the Commonwealth games in Scotland.

Again, all planning for these events have been done by the Getty Images team, the best in the business. The only thing left is for us is to show up and provide great coverage.

About the author: Based in Melbourne, Australia I have been a staff photographer with Getty Images for 16 years. After realizing that I lacked the height (and a little talent) to play top-level sports, I took to getting behind the camera and capturing the big moments.

In the past 16 year I have been lucky enough to have covered a multitude of local and international sporting events for Getty Images. These include Football World Cups, Olympic Games, Formula One Grand Prix, Moto Gp, Asia Cup Football, Cricket, Australian Rules Football, Tennis events and may other sporting events.

I thoroughly enjoy what I do and can’t imagine doing anything else. There is saying somewhere: “Find something you love to do, and you will never work a day in your life.” Well that certainly rings true with me, I can’t think of anything else I’d rather be doing.

Pentax Announces Its Own CMOS Medium Format Camera, Will Show it Off at CP+